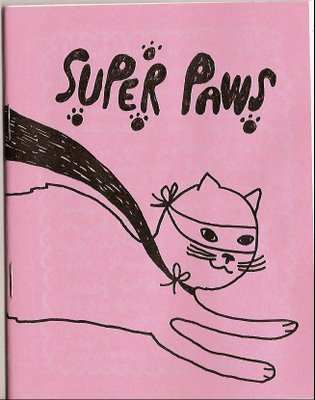 Cats have a rich comics legacy. Sure you’ll find a lot of dogs in comics, but cats are king. You can do so much with the character of a cat. They’re mysterious, malleable, a little neurotic, and damn cute.

With Super Paws, Missy Kulik adds to that tradition in a John Porcellino style. Her Nilla is drawn a lot like Porcellino’s Masie, while Kulik’s art feels a lot like King Cat. Her prose is breezier – more cheerful. In this 16-page Super Paws mini-comic, she introduces us to Nilla, who she found at the local shelter.

Kulik bounces from little slice of life observations centered around Nilla, to the story of finding her at the shelter, and finally to the fantastic, as Nilla assumes her “Super Paws” identity. 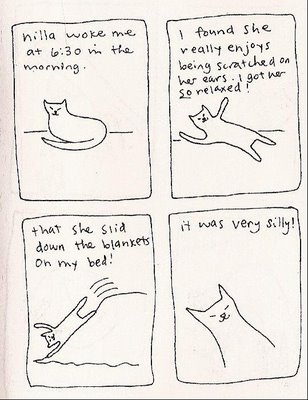 This is one example of what I like about mini-comics. It’s personal. It means something to the artist and connects me the reader with her through the art and the subject. The last page has a picture of Nilla enjoying her “birthday cake” celebrating her adoption from the shelter. That’s pretty cool, considering the alternative to adoption that shelter animals face. 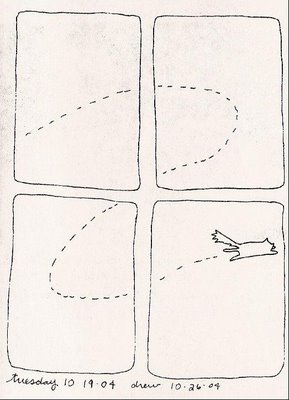 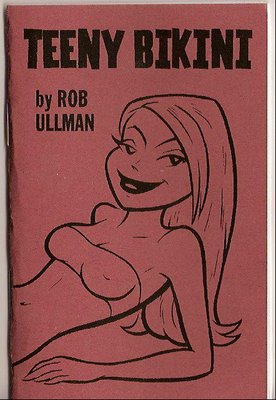 Subtitled "A Scandalous Selection of Sketchbook Scrawlings," Ullman's tiny little sketchbook is a joy. I've liked Ullman's work since he did the "Savage Love" illustrations in the Washington City Paper. Teeny Bikini is short and sweet. It's 16 pages of sketches, punctuated by finished drawings and sandwiched between vellum endpapers. I love vellum, and Ullman uses it to great effect in this example. 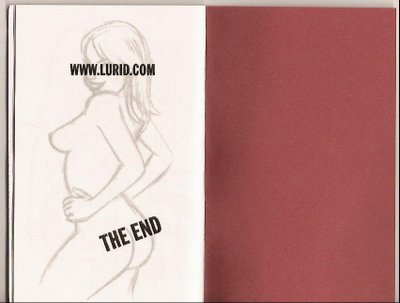 Ullman's figures are compact and curvaceous. Thankfully, they rarely resemble the impossible freaks you find on the cover of something like The Gift or god forbid, Ant. Ullman draws girls, girls next door, gilrfriends, wives, check out girls, and waitresses. He draws women, not beasts. 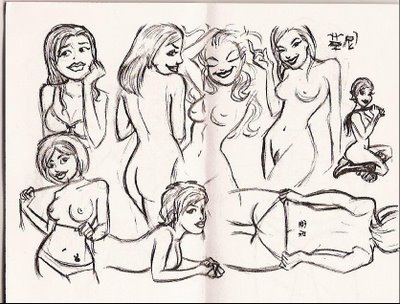 If you're not familiar with his work, go check out his online store and his blog. Lots of great drawings at the blog. Teeny Bikini #1 is $2. Issue number two came out this month as well, and it's $3.
Posted by Shawn at 7:43 PM 1 comment: 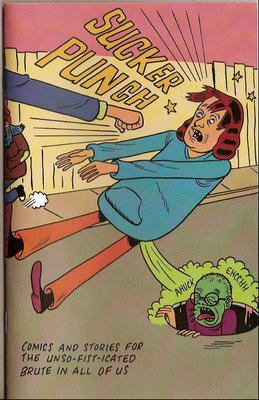 Mark Jason Robards’ first issue of Sucker Punch is essentially a three part story titled, “Today is the Day I Wish They Would Hold a Parade in My Name.” In between these three installments, Robards inserts shorter strips starring supporting characters. For his art, Robards uses a clean, effortless looking line mixed with very energetic poses; this gives his comic a real boost. 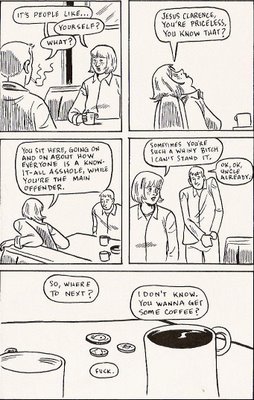 The characters in Sucker Punch look like what you might find in an Archie Comics/Eightball crossover. On the one hand, the characters are slacker types, but on the other hand, their actions are exaggerated a great degree like a “bigfoot” style throwback comic. Robards deftly uses devices like floating hearts and stars, as well as obvious physical humor like pratfalls and wildly hanging tongues. 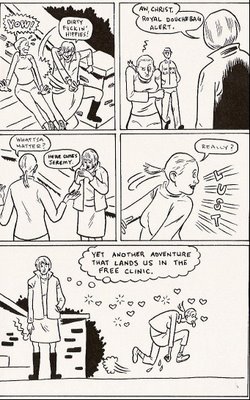 Clarence Bathwater is an aspiring writer who actually writes very little. His friend and ex-girlfriend Freida Beans serves as Clarence’s sounding board and reality check. Sucker Punch is Clarence whining about bums and not having enough time to write; he’s not a very sympathetic character. Instead, he’s just pathetic. Frieda is the character in the story you like. She calls Clarence on his bullshit. Two other characters, Harry Jiggs and Penny, serve as the stars of the shorter strips. Remember the annoying guy in the annoying movies Clerks and Mallrats, that’s Harry Jiggs. His role is thankfully small.

Sucker Punch is a 32-page mini-comic with a color wrap-around cover for $3. You can purchase a copy online at the Short Pants Press store. Short Pants Press is a group based in Chicago and St. Louis, and they have a damn fine postcard. There’s a duck on it, therefore I like them very much. 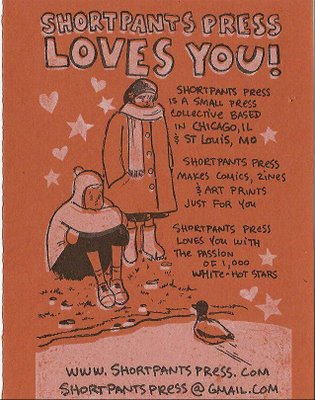 In the SIZE MATTERS offices, a healthy stack of mini-comics waits patiently. The mini-comics, and their creators, wait for me to get off of my ass and review them. I appreciate their patience, even though I know it’s wearing thin.

Truthfully, the warm weather makes it difficult to stay inside and look at comics. And yet the comics keep stacking up. I see them creeping into the edge of my consciousness, even as I decide to take Kate out for drinks instead of scanning in pages and writing short reviews.

Anyway, I’ve got a lot of stuff to review; I know this. If you’re waiting for a review, I promise I’ll get to your mini-comic. I’ve glanced at most of the mini-comics before putting them into the stack; there are good comics in that stack. Stand by.

In the meantime, have you seen Dan Zettwoch's blog? 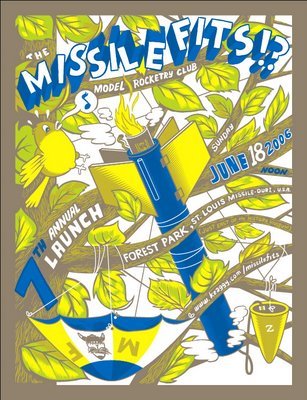