This is What Concerns Me by Susie Cagle 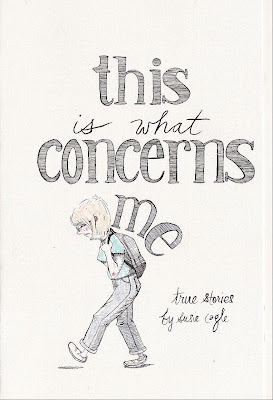 In This is What Concerns Me and This is What Concerns Me Presents Remainders, Susie Cagle catalogues the things that bug, perplex, or annoy her. Shopping for vegan safe food, used condoms on the sidewalk, security cameras on the rooftops of her neighborhoods - everything is fair game under Susie’s pen. Over 13 black and white pages, she uses whatever space is necessary to get it out, even devoting 6 pages to the two-part “Security.”

The cover to This is What Concerns Me is my favorite part of this issue. Her body language suggests a real weight, which is also shown by the letters that form the word “me,” and the backpack Susie clutches. Her head is down as well, lending her the picture a seriousness of purpose. Inside, however, it’s fun and games. She pokes fun at herself as much as she pokes fun at others. Susie’s art is light, expressive and perfectly nuanced with shadow and crosshatch. She hits a nice balance of white space and shading in these pages. 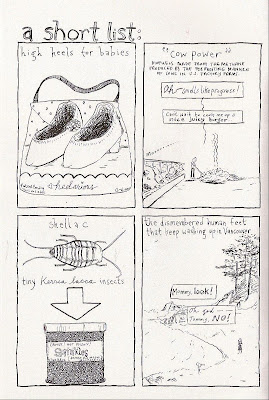 The 16-page This is What Concerns Me Presents Remainders is a bit more polished. Her line seems more assured and the wide horizontal page gives the words and pictures more breathing room. Three episodes of “Smashing in the Kitchen” give recipes that range from oiled and baked veggies with Susie to killing, gutting, and skinning a moose with Sarah Palin. Her page layout is at its most inventive over these pages.

Also included in this issue is some quick and easy ways to spot an FBI agent at a potluck, drawings of actual foods from a school kitchen in Harrodsburg, VA, and a nice two page spread on how pervasive corn is in our diet (read The Omnivore’s Dilemma to really get freaked out!). 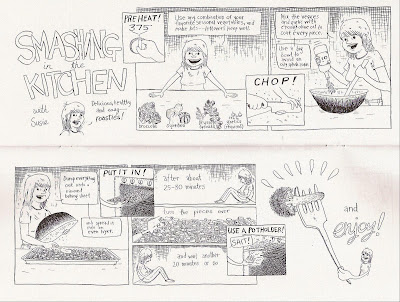 Both of these minis are available from Susie’s website for $2 each plus shipping.
Posted by Shawn at 7:54 PM No comments: 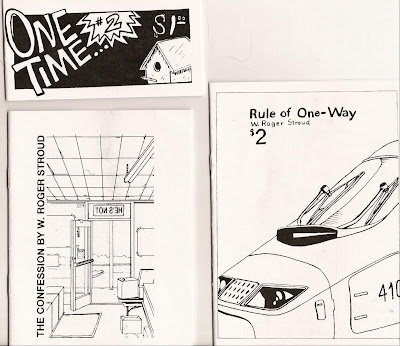 The horizontally oriented mini One Time, by Adam Beeby, tells a cute story of Adam making a birdhouse, installing it in his backyard, and then quickly deciding to modify his original design. One Time is drawn simply with very little embellishment. Adam draws himself as a gingerbread-like figure with rounded limbs and three holes for his eyes and mouth. 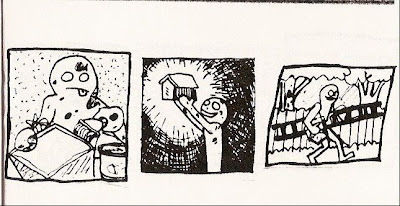 This mini is a good example of the quick gag format used so effectively by a lot of artists. Adam doesn’t try to hard. He picks a short memory or story and gives it a simple, but effective design. He uses the last page for the gag and delivers a solid $1 mini-comic.

The Confession of a Most Intimate Memory by W. Roger Stroud is an eight page meditation on a terminally broken relationship. The narrator shares a secret of how he cruelly tested a woman he may or may not have loved. He deliberately lied to the woman to test her honesty. He was looking for the moment when she called “Bullshit,” but instead found nothing but destruction. 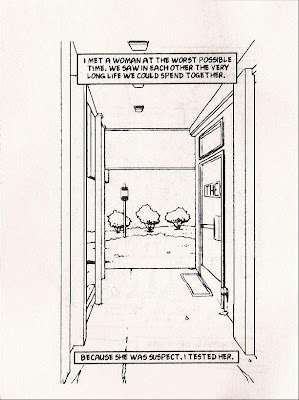 Over drawings of landscapes or empty rooms, the prose of The Confession floats neatly in carefully lined text boxes. A separate set of single words, strung together to form the central theme of the comic, nests within each of the first several pages. The lines of the images are photo-realistic and stiff, creating an inflexible air to the words that pile up to create this gloomy memory.

Rule of One-Way, also by W. Roger Stroud, is an eight page mini-comic, slightly larger in format than The Confession. In Confession, neatly lined backgrounds filled the pages; in Rule of One-Way the carefully constructed backgrounds are replaced instead by figures of people in a train station. The characters are drawn almost as rigidly as the backgrounds; they seem frozen in time rather than fluid. 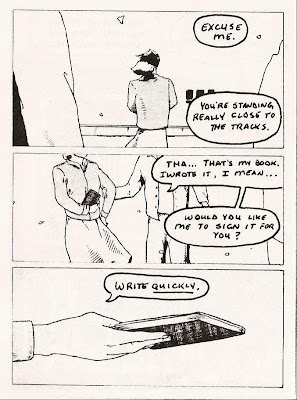 The story itself is quick, brutal, and marked by tragedy. There isn’t much room for things to develop, but it works very well in an eight page format.

Contact Adam, the founding member of Secret School Press, to see about purchasing SSP minis. One Time and The Confession of a Most Intimate Memory are each $1 and Rule of One-Way is $2.
Posted by Shawn at 6:55 AM No comments: