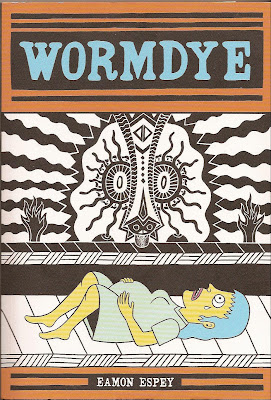 Here's another Secret Acres book collecting mini-comics. This arrived with a little rubber rat bound up across the cover with yarn. Unfortunately, Chloe the Dog took quite a liking to the rat and I'm sad to say that the rat did not survive. The book made it out okay though...

Eamon is a dark bastard. I was a little bummed when it started with two brats putting a cat in a microwave, but the resulting twist that lands their sister in trouble was enough to make me realize that nothing is sacred in Eamon's world. The Pope has quite an appearance later in the story. 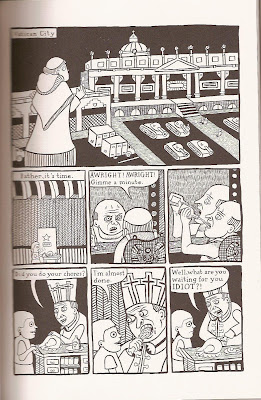 You find a constant theme of struggle and an almost exhausting feeling of surviving an adventure. There's really no one to root for; the kids Marco and Tommy are complete bastards and the other characters just manage to muddle through events. Midway through the book, he unleashes some full page drawings of bizarre creatures locked in some form of struggle. 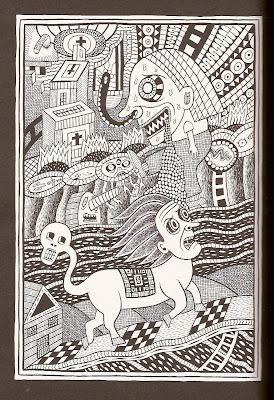 Eamon's art is intricate and at times entrancing. You get the feeling that he's really getting into a groove working on these pages. You can tell that he enjoys the use of patterns and how the repeated imagery lends to the overall effect of the page. You can pick up a copy of Wormdye at the Secret Acres store. It's $13 for 128 densely packed pages of mayhem and oddities. If you happen to live in the Chicago area, I think you can still find copies of the mini-comics at Chicago Comics. I had picked up a couple issues there in the past and recall still seeing issues in the mini-comic racks.
Posted by Shawn at 8:24 PM 2 comments:

The Comics of Samuel Gaskin
When you pull something like this out of an ordinary manila envelope, you know you are in for a treat. 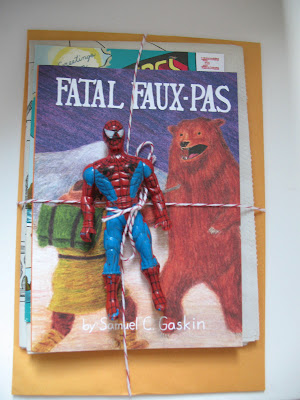 After freeing Spider-man from his yarn prison, I unpacked the 96-page gag comic book Fatal Faux-Pas and a tabloid comic titled Pizza Wizard. Also included in the package is a slick advert for Secret Acres, the publisher of Samuel's Fatal Faux-Pas, Eamon Espy's WormDye (up next in the review pile), and a collection of Theo Ellsworth's Capacity collection.

Fatal Faux-Pas is a meaty mix of short gag stories riffing on pop culture. It's all in here, from Harry Potter to Saved By the Bell, to one of my all time favorites - Hanna Barbara's Speed Buggy. Samuel's art ranges from the thin line simple look of John Porcellino (in fact he even has a King Cat homage story in here) to more fully fleshed out and richly shadowed panels like the one below where Harry tries to cast a Black Sabbath spell on Professor Snape. Snape responds with the Crimson Ghost skeleton from the Misfits. 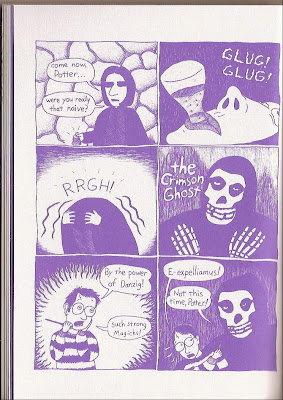 Fatal Faux-Pas is $10 from the Secret Acres store.

Pizza Wizard, a tabloid newspaper style comic, follows the adventures of Pizza Wizard and his friend the Stuff Troll. In the first chapter, they meet and the Pizza Wizard convinces the Stuff Troll to accompany him on a journey for – wait for it – a magic pizza. Yeah, it’s as silly as it sounds, but the adventure feels like a way for Samuel to fit as much weird shit into his story as he can.

They run into talking trees, huge plastic turtles, the dreaded Ghost dragon, a band of those freaky trolls from the 80s with the crazy hair. This story doesn’t necessarily go anywhere, but Samuel uses some interesting panel designs and page structures to play around with while he meanders from chapter to chapter. Pizza Wizard is $3 for a good sized 24-page comic on newsprint. 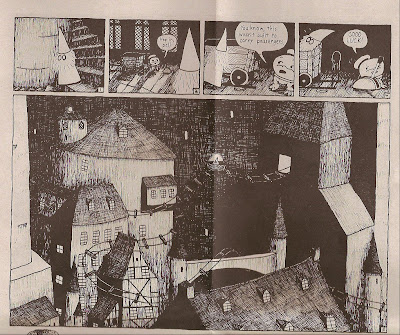 The above page is one of the more interesting pages artistically; it seems a little reminiscent of Dave Sim’s Cerebus work, but without the woman hating stuff.

Go check out Secret Acres. Next week, I’ll have a review of Eamon Espy’s Wormdye.
Posted by Shawn at 6:11 PM No comments:

Weird Shmeird is a flip-book mini-comic. Lane and Ryan each start from opposite covers of the book, then each 28 page story bumps into the other in the middle of the book with the line, “Weird Shmeird.” 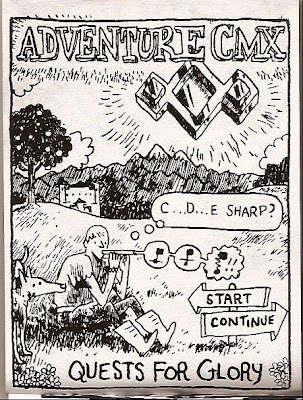 Ryan’s story is told as a multi-level video game and his art has a bit of a similarity to Kevin Huizenga’s mini-comic work. The penultimate chapter, titled “The Valley of Shifting Stones” is the neatest visual piece in his story. The repetitive pattern of the stones, cross hatched with shadow, gives this section a unique background. 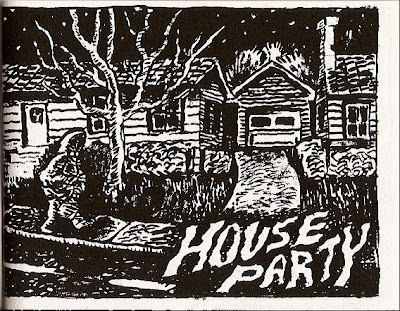 Lane’s story, “House Party,” is dark as hell – visually and story wise. His heavily shadowed backgrounds and heavily laid line make this tale crackle with atmosphere. Maybe I’ve been to too many house parties like this in the sticks, but the barely contained violence simmering underneath each page was palpable until the very last panel.

Ryan’s Picnic at Tough Beach is a mostly silent exercise in intense physical effort and movement. 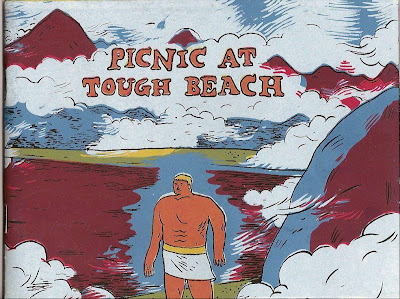 As a group of gods cycle through calisthenics and heavy lifting on the beach, Ryan does a fantastic job at capturing the movement and concentration in their lifting. I’d be remiss if I didn’t mention the gorgeous silk screened cover spotted with clouds. The cloud theme continues in the opening pages, as Ryan lays down thick brushstrokes that hint at the fullness of an illustrated cloud – nothing white and fluffy here. Those same thick strokes highlight the movement and startle lines that radiate from the heads and muscles of the gods at Tough Beach. 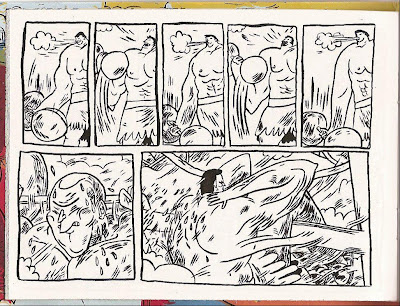 When the silence gives way to words in the last several pages of the story, it’s an abrupt shift in timbre and feeling; the gods become more approachable, somehow more human as they marvel at Achilles’ feat of lifting Hanging Rock. 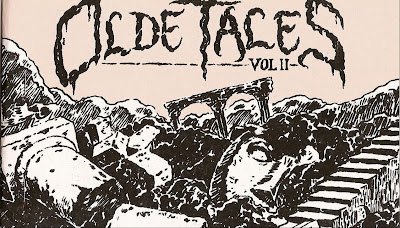 Lane’s Olde Tales: Volume II continues his creep on from Weird Shmeird. In “A Fireside Tale,” an old, topless witch, complete with drooping tits to her navel, regales a group of youngsters with her tale of an epic contest in which she bests a lizard beast. 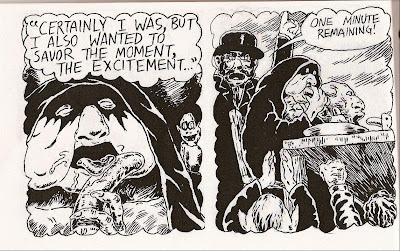 I don’t want to give away the contest, but Lance uses some phallic props to illustrate the old witch’s oral skills. The clueless kids look upon her in admiration as she delivers the ultimate final line echoing a ZZ Top song. That’s all I’m saying.

In “Wasteland,” three American tourists are touring ancient ruins and begin to lament the lack of women around to entertain them. They get MUCH more than they bargain for when a pissed off minotaur pays them a visit.

I really enjoyed Lane and Ryan’s work. They both hail from Baltimore, MD and you can find out more about their work at the ClosedCaption Comics blog. I’ve included a scan of their attention grabbing envelope as well. 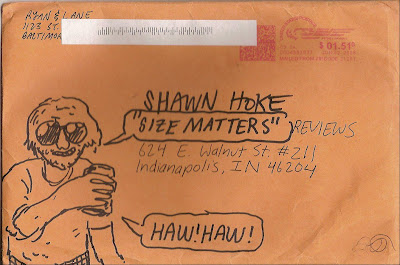 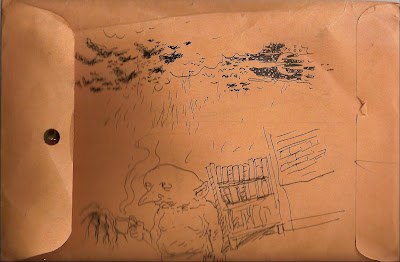 I can’t tell you how many cool envelopes arrive in the mail here at the Size Matters offices; I’ve always meant to do a post featuring nothing more than envelopes from the likes of Gary Panter, Souther Salazar, Allison Cole, Dan Zettwoch, and many others. Look for that soon as well as a more frequent posting schedule. I’m getting a new laptop and have carved out some time at the neighborhood pub to sit down and do reviews. I hope people are still interested. Trust me, there’s some good stuff in the review pile…
Posted by Shawn at 8:58 PM 1 comment: