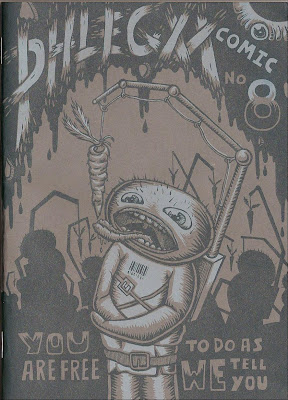 Issue eight of Phlegm by Phlegm, or aka Dan no last name, is a dark, densely shaded attack on modern advertising similar to, but much more disturbing than, the subversive and colorful Wacky Packages. To begin with, Dan’s subject matter is more grown up and his characters more purely disquieting. 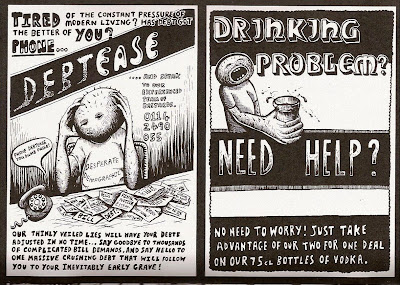 The faces of Dan’s characters are simplistic and eerie. The rounded heads, slitted and tilted eyes, missing nose, and often-misplaced mouth make the characters seem barely human. He strips the ads and the scenes down to the bare, disgusting untruths of advertising. If at times the slogans seem hackish or trite, they reflect the obviousness of the adverts he lampoons.

Dan’s art is very well suited for this messy and dismal subject. He uses heavy swaths of ink and shifting fonts to frame his humanoid characters. The fonts swell, loop, and stretch in each panel as they slink towards the bad pun or hateful finish. 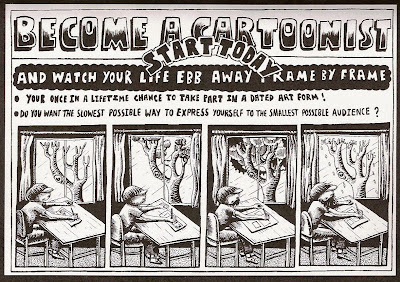 Dan sums up this issue of Phlegm on his website:

“The comic contains my pen and ink illustrations, cartoons, and street art. The work is intense, often surreal and thought provoking, but most of the time it looks like a mad person has been locked in a room for years with no company but a bottle of Indian ink and a scratchy nib….because that's precisely what it is.”

Issue eight of Phlegm is 36 pages with a handsome screen printed (on both sides) cover. You can grab a copy at Dan’s online shop. For more information on his work and some damn nice artwork, check out the Phlegm Blog.
Posted by Shawn at 9:39 PM 2 comments: