Carl is the Awesome Volume 2 by Marcos Perez 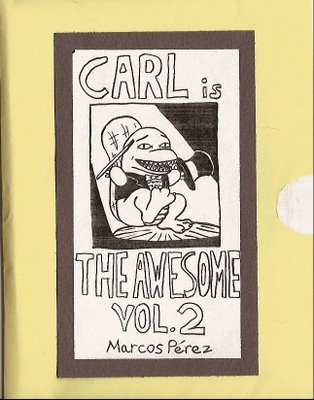 In issues 1-4 of Carl is the Awesome, you get to know the lovable, overconfident Carl. Carl is a dinosaur. He has a beaver’s tail and wears a little black vest. The ladies love him, he loves the ladies. If you haven’t read the first four issues, you should drop the $2 and pick them up. In these first four issues, Carl rules.

Issues 5-8 are slightly less engaging, but Carl is still Carl. In issue 5, Carl is the leader of a rap super group. “Our game is tighter than a jar of dills!! Twist off the top and enjoy the taste of our willis!!!” Carl makes the perfect rapper, but of course he’s so awesome that he and his mates, DJ Bill$ Murray and Miss Ill-Toe Diva, are chased by rabid fans.

In issue 6, with the help of a mystical mirror, Carl meets L’Rac, his French twin. L’Rac is every bit as awesome as Carl. Since the world can’t handle the overwhelming awesomeness of the two together, they’re forced into a competition to eliminate the loser and restore the awesomeness balance of the globe. The competition involves the ladies. That’s all I’m saying. 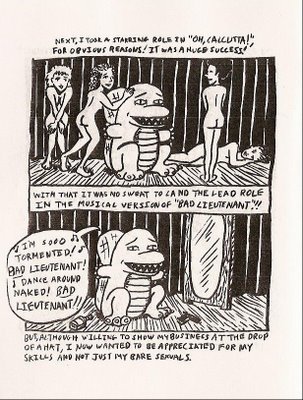 Issue 8 is probably the best of this bunch, and it’s about something near and dear to all of our hearts – the small press comics festival. Carl shows you how to behave at a show like SPX or MoCCA. Not only does he teach you the fine art of swapping comics, he shows you how to navigate the sea of ladies at these shows. You go Carl. 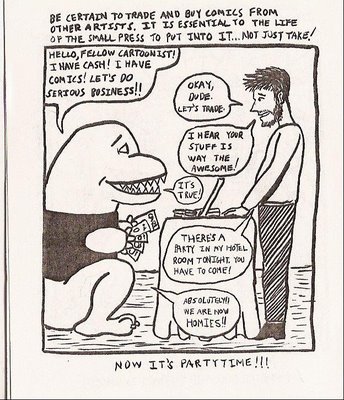 Perez does a fine job with Carl, and it’s a great idea for a character. The packaging, presentation, and price point are all perfect for Carl’s adventures, but the nature of the stories, a dinosaur bragging about his awesomeness in different situations, can feel less fresh after the novelty wears off. However, issues 5-8 of Carl is the Awesome are packaged together in a slipcase for the price of $2.00. It’s just $2 for a nice little set of mini-comics that you can hand to almost anyone and elicit a giggle or two. You can purchase your own at the CliffFaceComics online store.
Posted by Shawn at 10:30 AM No comments: 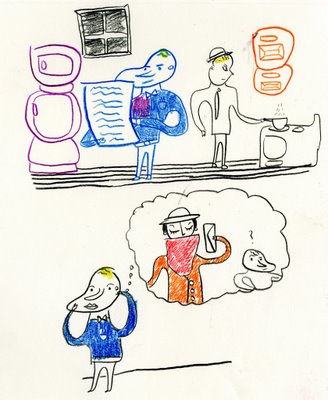 Austin English has set up a blog full of pages from a future story in his future magazine (it's like he's a robot boy or something), Windy Corner.

Anyway, drawings by Austin English are always a good thing, and he has plenty on his new blog.

If you scroll down, you can check out these pictures from Tom Neeley at MoCCA.
Posted by Shawn at 8:32 PM 1 comment:

Madinkbeard on the loose at MoCCA

Derik was at MoCCA and he highlighted pretty much what I would have highlighted. Picturebox? Check. Global Hobo? Check. Paping? Check. He's like my evil twin. Except both of us are probably pretty cuddly once you get to know us.

Also Derik has this review of Frank Santoro's new book.
Posted by Shawn at 8:37 PM 1 comment:

Here are a few early reports and pictures of MoCCA. Looks like a good time.

Pictures from Chris at Panels and Pixels

If you have anymore let me know and I'll post them.
Posted by Shawn at 12:33 PM No comments:

This weekend is the MoCCA Festival. It’s also the second year in a row that I will miss it, but I hope that everyone who goes has a blast. From my admittedly limited con perspective MoCCA and SPX are the twin giants for quality mini-comics. I haven’t been to APE, SPACE, or STAPLE, but both MoCCA and SPX rule for mini-comics. MoCCA was my first “comics convention,” and I can’t think of a better way for a comics geek to plunge into conventions. That was also the only time that Ed Cunard and I have hung out in person. The bastard has bailed on the last two SPX shows, but he’ll be at MoCCA this weekend. Here’s his recommendations this weekend for everything not mini-comics. I do have to second his Pat Lewis suggestion. Find Lewis and buy everything on his table. He brings the funny.

Who else is going to MoCCA? Well most of the cool kids will be there selling their wares. Don’t be afraid to approach the tables with the sad artists setting behind them. Look at their books, ask them questions, buy what strikes your fancy. Nothing should set you back too much cash. Another great thing about MoCCA is that the crappy publishers don’t bother attending these, so it's almost all quality.

If anyone has the gumption to do a mini-comics centric MoCCA report, I’ll post it here and give you full credit, as well as send you the biggest box of mini-comics you can imagine for your trouble. Probably should have posted this offer sooner though… 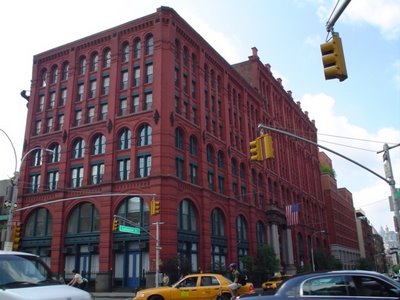 I forgot to mention how much I love the Puck Building. Have fun kids! Buy some minis and flood the surrounding bars.
Posted by Shawn at 10:46 AM 3 comments: 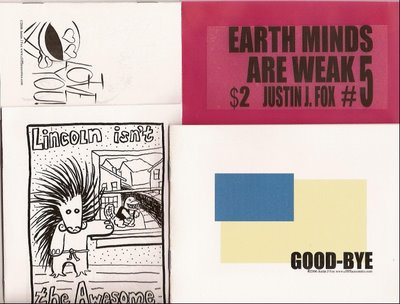 This in an interesting concept, and different format, for Fox’s fifth issue of Earth Minds mini-comic. To start with, issue 5 is a trio of mini-comics packaged in a brightly colored translucent vellum envelope.

“Good-Bye” is a stiff full color 8-page mini that most closely resembles the first four issues of Earth Minds are Weak. It’s a wordless reflection on loss presented in an unorthodox manner. Many of you have lost someone, but probably not like this. 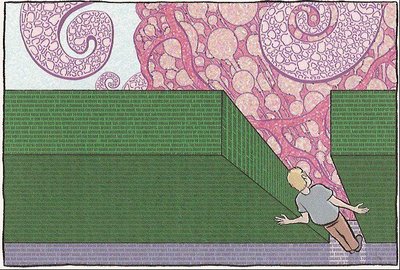 With “I Love You!,” Fox takes a “guy loves girl, girl ignores guy until it’s too late” story and takes it to the extreme. Stick figures have never been so engrossing – or maybe just gross – in their quest to prove that love’s a bitch. 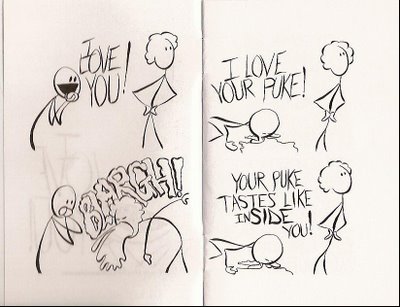 Poor Lincoln. In “Lincoln Isn’t the Awesome” he shows why he’ll never compare to his gregarious and popular stable mate Carl. Eight pages of woe and misery are more than enough to convince the reader that Lincoln will always play second fiddle to Carl. But just like it’s fun to read Carl and laugh at his overzealous chest thumping (sorry, Carl!), it’s fun to watch Lincoln mope about. Maybe he should trade that handlebar mustache for a little vest like Carl’s. 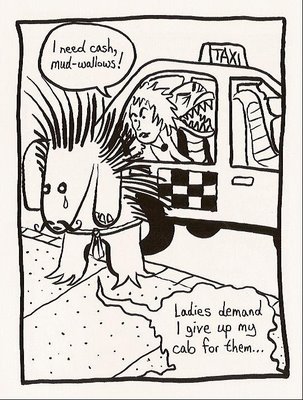 Earth Minds Are Weak #5 is available at Cliff Face Comics for $2. While I’m mentioning Cliff Face Comics, look for a review of the next volume of Carl is the Awesome! by Marcos Perez next week.

If you’re going to MoCCA this weekend, Fox and Marcos Perez will be there selling their minis.
Posted by Shawn at 3:28 PM 1 comment: 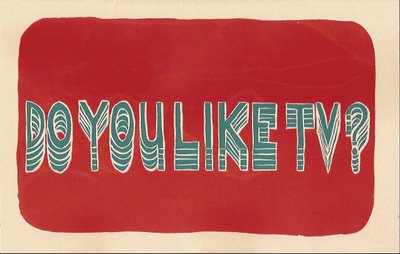 Here’s a TV themed mini-comic edited by Levon Jihanian of Igloo Tornado that includes pages by Scott Nobles, Souther Salazar, Dave Kiersh, Josh Frankel, Gin Stevens, Tom Neely, Rina Ayuyang, Toby Craig, and many others. Each artist gets a page (Levon and Tom Neely get two pages) to shout out to their favorite or not so favorite TV moments. 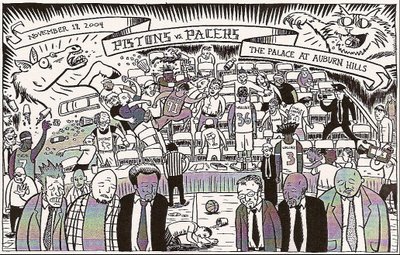 A not so favorite moment. Although I’m a Pistons fan and I hate the hometown Pacers, so this one kind of made me giggle.

Inside, Scott Nobles does an awesome drawing of Mr. T. A-Team geeks need to find this mini-comic now. Actually between this drawing of Mr. T and Mark Todd’s Mr. T in Bad Ass, you could begin an all Mr. T anthology.

Souther Salazar’s page consists of people sitting at 3 round tables. A guy in what looks like a fair booth is cleaning out a glass, while another gentleman storms through the door. At that point, you’re a bit clueless until you notice the word in the very bottom right hand corner – “NORM!” Ah that’s it…

Dave Kiersh likes those after school specials and made for TV movies. Chances are he remembers much more about them than you do. 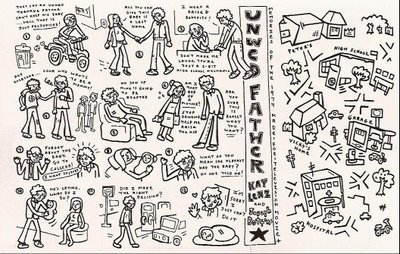 Copies of Do You Like TV? cost $3. If you’re going to MoCCA this weekend, perhaps you can find a copy at the festival. You could also try emailing Levon through his website and begging to buy a copy. Begging sometimes works…
Posted by Shawn at 8:03 AM No comments: