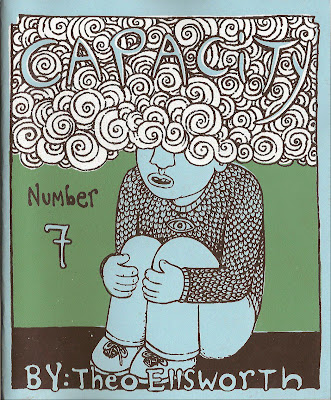 If you’re not familiar with Theo’s work, he strikes the perfect balance between children’s storybooks and comics. He's wildly imaginative and just a little bit silly. Reading issues of Capacity, or anything else of his, is always a lot of fun. Often the level of detail and obsessiveness is a bit startling, but this tendency keeps you engaged as you read. 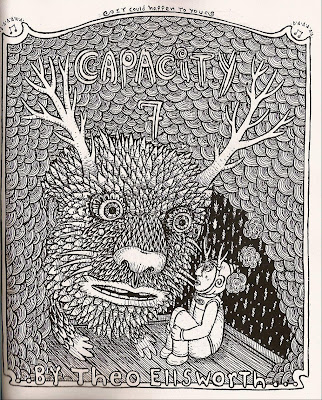 See what I mean. This 32-page comic has two longer stories ("Witch Medicine" and "Wizards Tale") and several one page pinups and gags. "Wizards Tale" features a man who comes face to face with every dream he had ever dreamt. Here's a page from that story. 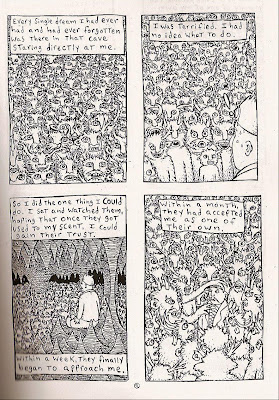 An example of one of the gag pages. 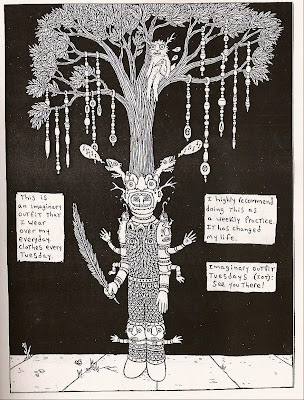 For more of Theo's work visit his website. His stuff can be found at Chicago Comics and Quimby's. If you aren't near Chicago Comics or Quimby's, you can buy Theo's comics online at the excellent Secret Acres online shop. Capacity issue 7 can be yours for $5. Grab issue 6 whie you are there for $3.50. You won't be sorry.
Posted by Shawn at 8:11 PM 2 comments:

The Treehouse and Other Stories by Davi Shy 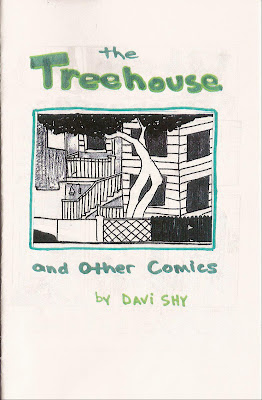 Davi Shy turns in a quiet mini-comic with the saddest goldfish story you will ever read. Seriously. Treehouse is five short pieces over a dozen pages featuring her meditations on daily life. 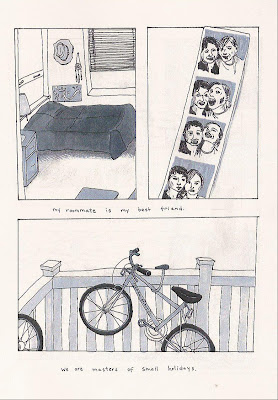 What sets this mini apart from many others mining this same vein is the dash of color she uses throughout these stories. In "Welcome to the Treehouse II" she begins with different shades of safe and secure blue. In "Other Stories from Summer 2007," she expands the color palatte with the shock of light green leaves just outside a window. In "Everyday Dilemma" and the goldfish story, she introduces shades of pink and red.

You don't see many $2 mini-comics that use color and it's enough, along with the sad fish story, to set this one apart. Davi ably captures the small moments in life; the most accomplished panels feature still life drawings rather than movement or action. 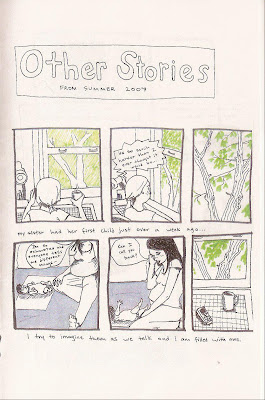 Check out more from Davi at her blog. You can buy copies of Treehouse for $2 from Chicago Comics.

From 9am to noon this Friday, Chicago Comics is having a 30% off sale. Kate and I were already planning on going to Chicago for Thanksgiving, so it looks like I'll be saving myslf 30% on comics. Nice.
Posted by Shawn at 8:38 PM 1 comment:

Magic Hour Issues One and Two by Alex Holden 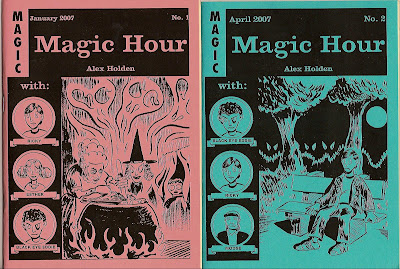 Alex Holden’s Magic Hour captures the curious mix of childhood reality and unreality. Ricky gets mixed up with Black Eye Eddie, who may or not be a zombie. The other kids are certainly sure that Eddie and his sister Carlotta are more than they seem. Ricky and his friends are focused on tagging trains and walls with lifted spray paint, but along the way they run into a few problems. 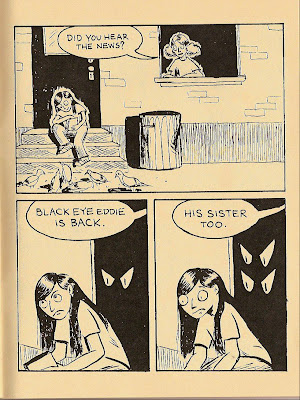 Issue one of Magic Hour is two stories in one package. The second story, “Stay Out of the Gorgon Yard,” is actually a separate 24-page mini-comic stapled into the main mini-comic. The art in “The Gorgon Yard” is light blue against a pitch black paper. This color scheme gives the story a nice creepy effect.

Alex’s art matures a bit with the second issue. His lines, more assured and confident, are thickly drawn and his backgrounds are sketched out just enough to suggest a convincing backdrop for his tales. 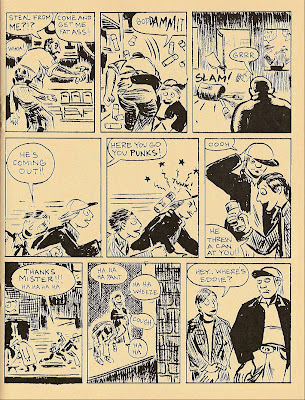 The second issue is part one of a story titled “Field Trip.” Ricky and Black Eye Eddie hook up with the older teen, Moose, to tag some trains. Most of the issue details the quest for spray paint, but Alex drops a tantalizing surprise on the last page of this 18-page mini. 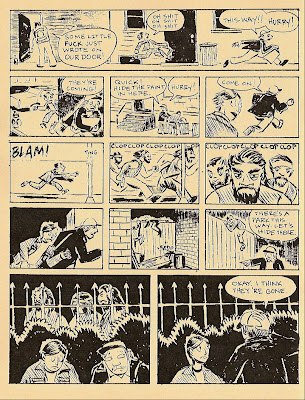 Reading these two comics leaves you with the weird sense that anything can happen in Magic Hour. The possibilities are endless, just like that feeling you had when you were a kid running on the streets –that weird old lady’s house is most assuredly haunted, and the big old dude in the wife beater that lives down the street certainly eats children. These types of little details pop up matter of factly in Magic Hour with regularity and Alex does such a good job of telling his story that you don’t question where the story goes.

You can check out Alex's blog and pick up copies of Magic Hour for $2 at USS Catastrophe.
Posted by Shawn at 4:51 PM 1 comment:

Road of Knives by Zak Smith and Shawn Cheng 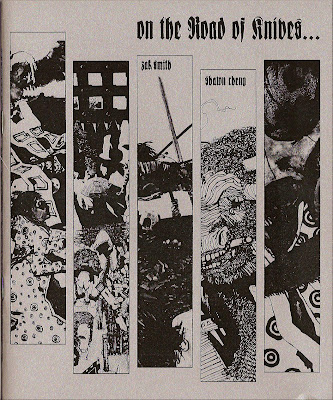 Road of Knives is a print version of Zak Smith, Shawn Cheng,and Nicholas Di Genova’s excellent battle blog, Road of Knives. In the foreground of the first panel, Zak drops in a nightmarish beast hunched over with an absurdly large axe. Underneath in the next panel, Shawn draws a pair of ominous-looking, ferociously armed serpentine warriors – and a much less ominous little guy. This little dude looks totally out of place. He’s definitely outclassed by the other menacing figures on the page. 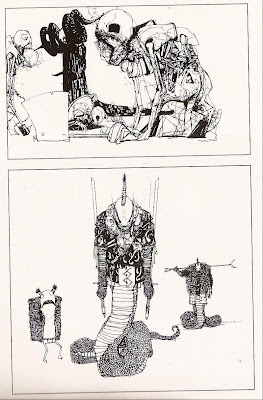 On the next page the battle begins; coiled figures unload on each other as swords slice through flesh. On page 5 the little dude is almost crushed by a severed head. He disappears after that as the battle heats up. Later on page 11, you see him hauling ass away from the battle site. At this point, both artists’ canvases expand. The monsters grow to terrible heights, filling the page with their swollen and grotesque bodies.

Both artists excel at this type of subject matter. And this format allows unfettered imagination and a ridiculous game of one-upmanship.

Road of Knives features 16 pages of beastly carnage underneath a gorgeous silver screen printed cover. Get your copy for $2 from the Partyka online store.
Posted by Shawn at 5:39 PM No comments: