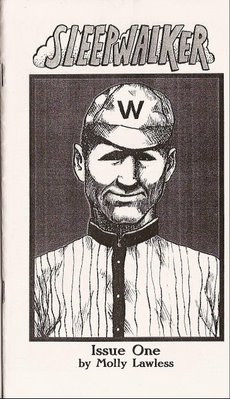 “Great Moments in Baseball” documents a not so great baseball moment. Strangely winning their last ever home game in 1971, the Washington Senators were forced to forfeit the game after being besieged by trash and debris from the stands. Here, Lawless crams the panels full of shading and detail. It gives the ballpark a claustrophobic feel that the players probably felt as the game sputtered out of control. 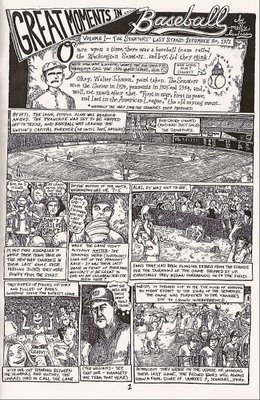 In “The Turning of the Worm,” loser Jeff worms his way into a famous writer’s life. The writer, Martin, is a mess, and Jeff pays Martin’s bills and answers his mail. Jeff convinces his friends that he assumes a much greater role in creating Martin’s books. After three years the relationship between writer and assistant grows antagonistic. Jeff takes pleasure in tormenting Martin, and it looks like just a matter of time before Martin reacts. In the story, you don’t feel for either Martin or Jeff, but when part one ends you are curious about what happens next. “The Turning of the Worm” is written by Carlton King and drawn by Lawless. 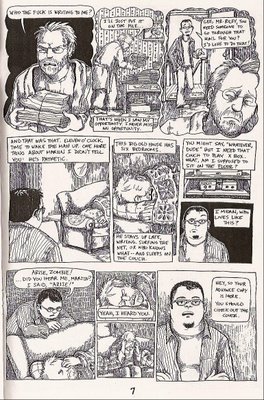 By using shading and crosshatching, Lawless adds unusual texture and depth. Her panels are rich with detail, but you never get the feeling she’s trying to hide her line. In “Turning of the Worm” especially, the extra shading gives Martin and Jeff’s world a kind of skeevy sheen.

Lawless also has a short piece about witnessing a crime and doing nothing. The art is sketchier and unpolished, giving it a breezier feel than the two other stories. One of the pin-up pages shows a barefoot Britney Spears carrying baby Sean Preston. Sean Preston is holding a bag of chips and a blank word balloon floats above his head. I filled my word balloon with, “These Cheetos ain’t ‘flaming hot,’ dammit!” I must mention that Lawless sent this mini in long ago, when a Britney and baby reference was still funny. Now it’s just sad…

Sleepwalker is a 16 page mini. You can get your hands on one by emailing Molly Lawless at mollylawless@yahoo.com. Also, she has a blog devoted to Sleepwalker. Check it out for more art samples and information.
Posted by Shawn at 1:51 PM No comments:

Also, for your viewing pleasure, a Like Story by Sommer Browning.

“Like Story” is from Browning’s blog, Asthma Chronicles. Go dig through the archives for funny stuff. Funny if you’re mean like me…
Posted by Shawn at 8:42 AM No comments: 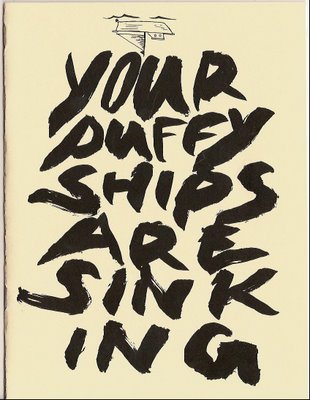 In Your Puffy Ships Are Sinking, Terry Corrigan and Garrett Van Winkle take turns drawing panels. An unnamed flying creature accosts a sleeping man, toys with him without waking him, and then leaves the man transformed. The two meet again a couple of pages later, exchange shouted words, and suddenly the flying creature, seeing someone else falling from the sky, departs.

I’ve just described most of Puffy Ships, but the three central figures stumble across more adventure. At the bottom of each page, an upside down comic traipses across the page. I read the whole thing as two distinct comics. I’m not sure that it’s correct, but this is what I did: after reading the main story, I flipped the book upside down and, starting from the last page, read the substory backwards. The substory captures the movement and rhythm of one of those flipbooks that you flip the pages quickly to emulate movement. 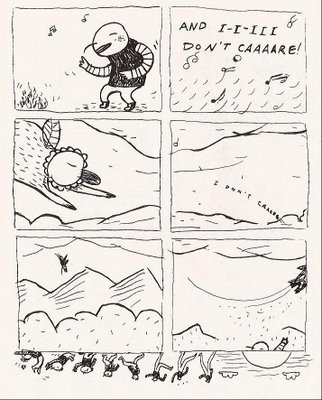 In Your Puffy Ships, it’s hard to discern Corrigan and Van Winkle as distinct artists. They both have a spare line that gives the work a feathery, airy quality. The pages feel light and some of the panels feel like they could float away. This is not a style that everyone loves, but I think it holds a certain charm.

No webpage that I could find to order the comic, but you can email Corrigan at puffyships@gmail.com or Garrett at how.to.draw@gmail.com

Garrett has a webpage.
Posted by Shawn at 8:49 AM 3 comments:

But, this is cool. I loves me some Mr. Big from Matt and Carol Dembicki.

He's been talking about a big trade, so I guess this is it. If you haven't read Mr. Big yet, you should order this.
Posted by Shawn at 3:51 PM No comments: