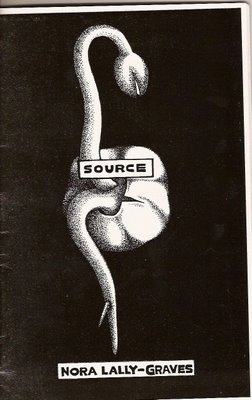 Lally-Graves ably illustrates her battle with fear in putting pen to paper in Source. I’m not sure if Source is her first work, but she’s already developed a unique way of capturing these feelings that we all have at some time in our lives. Sure you’ll find obvious visual metaphors and signals, but also some solid imaginative leaps from idea to paper.

She uses chunky swaths of black ink and repetitive patterning of diagonal lines to add texture and mood. Her style is difficult to pin down here, as she mixes more abstract strokes with a more straightforward approach. You can see samples of both below. 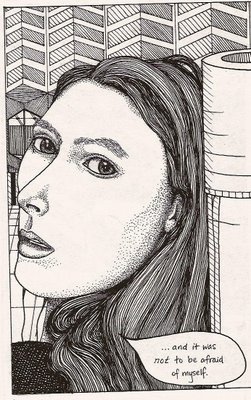 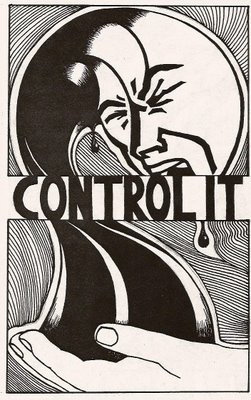 Source is a spare narrative illustrated mostly with single full-page panels, though she occasionally breaks out of that pattern. Over the course of 24 pages, Lally-Graves identifies her fear, faces it, and then buries it. It’s an uplifting mini, but not in that “Chicken Soup for the Mini-Comic Artist” way.

Source is $2 and you can get your own copy by emailing Nora at diavolerie@gmail.com.
Posted by Shawn at 9:29 PM No comments: 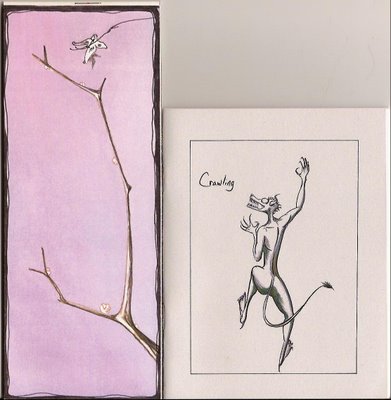 Fish Out of Water

This oblong shaped mini-comic is read with the stapled spine facing upwards. Fish Out of Water is more visual poetry than story. Davis uses ten, or eleven if you count the cover, images to tell the story of a fish snatched out of the water with a butterfly-baited hook.

As a reader, and because of the title, I focused on the plight of the fish, but the last page has a poem about the butterfly pierced by the hook. This made me revisit the cover and glance at the story from another perspective. On the cover the butterfly traces an arc through the sky; its trajectory is awkward rather than effortless – it’s on the end of the fishing hook, of course.

The first page of the comic focuses on the fish circling in the water, but this view is clearly from the vantage of the butterfly as it sinks to the water’s surface. On page two the butterfly breaks the surface of the pond with a very pronounced splash.

Here are the opening lines of the poem that ends the comic:

“Butterfly has a problem
a persistent wobble
a wandering bubble inside
and her steadiness is gone.”

Fish Out of Water is quiet and graceful. Contact Davis at squawkalong@yahoo.com and get your own copy for $1.50. Not to break the mood or anything, but Davis’ fish looked a lot like penises in this mini-comic. Hmmm.

Crawling
As in Fish Out of Water, the pages of Crawling only have art on the one side. So rather than thirty pages Crawling is fifteen pages. Each page is one panel consisting of an image and accompanying prose. The two characters in Crawling begin as reptilian or devilish beings, the tiny male figure climbing up the back of his partner, stalking her femaleness. She’s coy, but he drags her off a cliff and into the ocean. 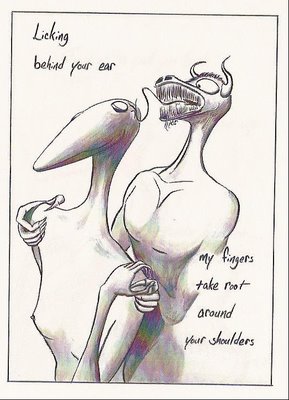 As they plunge deep into the ocean, the two figures regain their humanity and begin a struggle against nature and the forces that work to drive two individuals apart. The art moves from elegant and lithe to blunt and driving as the forces begin working on them.

Crawling is $2 and available by contacting Davis at squawkalong@yahoo.com

Neither of these minis are traditional story driven comics, but rather prose set to single images. That’s part of the charm of mini-comics; they can be more experimental and flexible. Sometimes it’s not so much the story you want to tell, but the feeling you want to communicate to the reader.

One small detail that I really liked was the tiny bird squawking next to Davis’ email address. Very cute.
Posted by Shawn at 6:48 PM 2 comments: 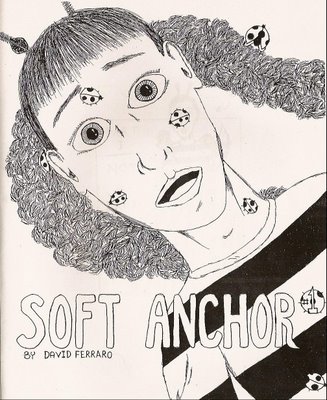 Ferraro’s art in Soft Anchor looks a little awkward, but his mini-comic is sincere and endearing. In this first issue of Ferraro’s mini-comic he’s 7 years old. The things that happen are things that loom large in the life of a boy that age: a best friend moves away unexpectedly, his father punishes him harshly, he plays doctor, and he tells inexplicable lies that make him feel guilty. 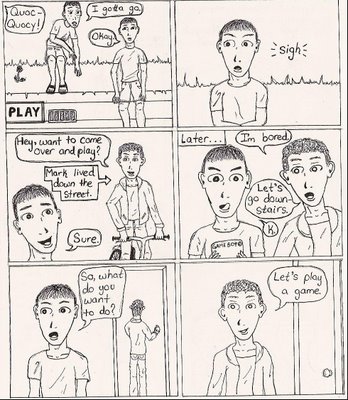 This is standard kid issues filtered through the eyes of an adult who suffered abuse as a child. It’s honest work with content real enough to rise above any shortcomings in the art. Ferraro needs to work on the stiffness of his figures, especially the necks, shoulders, and arms of his characters. The hands don’t look right either, but that kind of stuff will come with more time spent drawing. His storytelling is solid though, as are the layouts. This is a mini-comic that I enjoyed, and you can’t always say that. I even came to appreciate the wide-eyed looks of his characters; they’re kids after all.

And I really, really like this drawing of his family’s stereo. It’s my second favorite drawing of a stereo after Allison Cole’s stereo, sans power cord, in Neverending Summer. 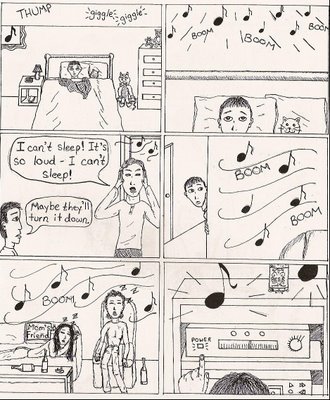 Soft Anchor is a good first effort that I hope Ferraro continues.

You can get a copy from Quimby’s for $3. Ferraro has a blog where you could probably contact him if you have any questions about Soft Anchor. Here's David's email address as well.
Posted by Shawn at 8:58 PM 1 comment:

Maose by Derik A. Badman 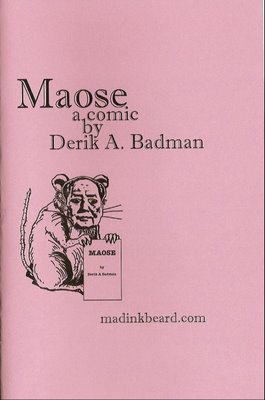 You probably know Derik from his blog Mad Ink Beard, but he also does comics. Over at Mad Ink Beard, you can find the webcomic Maroon, which I’m way behind on, and lots of mini-comic reviews.

Derik also is the author of Maose, in which he tackles a mouse problem in a unique way. It seems he’s a fellow vegetarian who gets a little queasy killing a living thing. But he also isn’t comfortable sharing his home with a mouse that pops out from the corner when he least expects it. So what’s a peace loving vegetarian to do to reconcile killing a mouse? 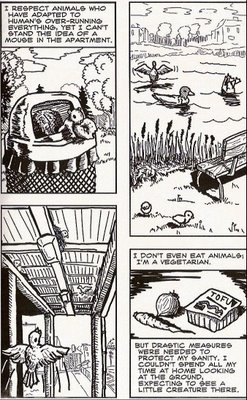 If you’re Derik Badman, you give it the mouse a bad rap. “I decided to name him something that made death seem deserving. After trying out a few dictatorial names, I settled on ‘Mao Mouse.’” Lianne shortened it to “Maose.” That’s him on the pink cover with his maniacal Mao eyes. 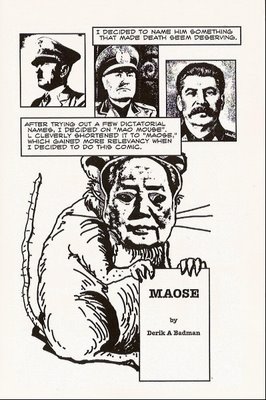 Maose chronicles the ups and downs of Derik’s mouse extermination policy, which mostly resembles a series of his failures and the mouse living to face another day. Images of the Katrina flooding in New Orleans occasionally pop up to remind Derik and the reader that his problem of a mouse in the house is really pretty minor, but it’s still a problem that he tries to solve.

Derik’s art is comprised of thick lines, occasional shading, and lazy cross-hatching. Many panels are close ups of rooms, corners, and furniture detail, giving you kind of an outsiders, if not mouse-eye, view. Neither Derik nor Lianne show up in panel, and it works this way; Maose is about the mouse and the space that he or she inhabits.

In the end, karma comes back to bite him. A mysterious pain in his shoulder appears, and there’s a drawing of a mouse (Ignatz style) on a cloud. The mouse tosses – what else – a brick down from the cloud at Derik off panel.

On the back cover, Derik writes that this was the first mini-comic that he’s made in six years. He should make more. In the meantime you can order your own copy of Maose for $2.50 at Derik's online store using PayPal.
Posted by Shawn at 6:57 PM 2 comments: 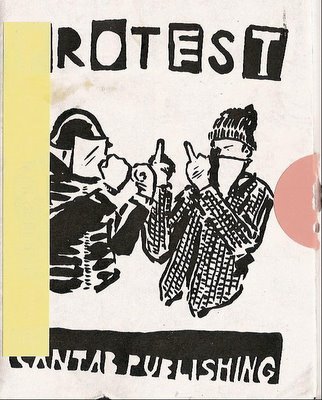 Protest isn’t your typical stapled mini-comic. It’s a folded piece of legal-sized paper that doubles as its own envelope. I’m always intrigued by what I get from Alex, because he never shies away from making a simple form a leap of faith.

You open Protest to find two policemen rushing towards a subway tunnel. At this point, it feels like a regular mini-comic – it’s mini-comic sized and the action shot of the police is a two-page spread against a white background suggesting open space. 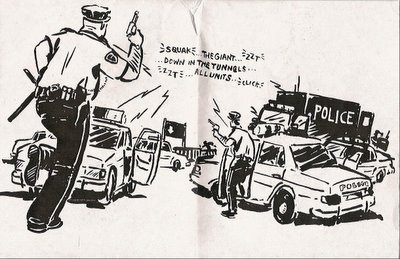 Then you unfold the paper again, and it’s a four-page spread stretched out flat of dozens of policemen, some of them in riot gear, rushing down several sets of stairs into the subway tunnel. Now, you’re looking at a standard letter-sized piece of paper, except it’s a little shorter vertically.

The action has escalated and the art feels denser, the background has switched from the open space of the street to the cramped staircases that lead to the darkness of the subway tunnel. There’s a sense of urgency as the policemen rush towards the tunnel opening.

You unfold the paper one last time and it’s a rush of images. Riot-geared police are running down a tunnel, but citizens and protestors await them. The sense of urgency rises as a protestor launches a Molotov cocktail at the riot squad. The riot squad shoots a canister of tear gas, and then your eyes travel from left to right to discover what the clash is all about.

This is an impressive piece of art. Alex has really figured out how to direct your eye to the action of the story, and Protest works almost flawlessly as a short story. The transition from the street, to the stairs, and into the tunnel is rendered so well that it creates a feeling of space for the reader.

Go to the Cantab Publishing website and check out the books section. You’ll find Protest there for $2. Yes, it’s just a legal-sized piece of paper folded down and mailed to your doorstep, but it’s worth it. Trust me. This is an edition of 50 to start with, so get off your ass and get your copy.
Posted by Shawn at 12:33 PM No comments: