Two from Rob Jackson
Train to Shanghai from Rob Jackson has some lovely and convincing backgrounds. It’s obvious that he’s spent some time studying the backdrop for this tale and one can picture him sitting on a corner in Shanghai, furiously sketching as people stream past him. The best thing in this book is the backdrop. The character design is less convincing, however. The bodies of the characters are often awkward, especially when he uses a heavier line to outline their forms. There’s an occasional shift between a fine line and a thicker line that just feels a bit clunky. 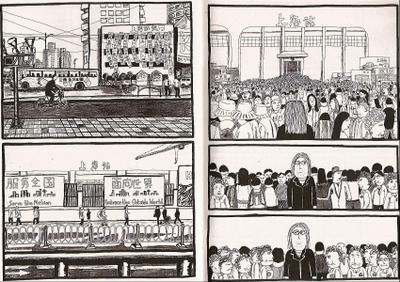 But Train to Shanghai is a nice story and I’m glad that I spent some time reading it. Rob’s excitement for his trip shines through, and he tells the story in a manner that makes it interesting to the reader. Train to Shaghai was completed in 2002 and it’s 24 pages for about a $1.75 (or one British pound). 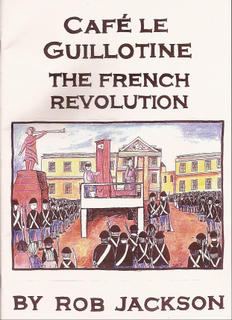 Café Le Guillotine: The French Revolution, also by Rob Jackson, is a 36-page glance at the French Revolution from the ground in France. Rob has dumped the thick line that he occasionally employed in Shaghai, so the art in Café looks more uniform. The character design is still on the amateurish side (the eyes are problematic on certain faces several times), but hell he’s making his own mini-comics here, so I’ll give the guy a break. Plus, he’s making a kind of historical comics that I’d like to see more of in comics.

Rob crams a lot of story into his 36 pages though, and it’s all through character interaction, rather than heavy narration. This gives it a more “ground level” feel. He begins a year before the revolution and shows the dissatisfaction of the peasants, and then quickly moves through the Three Estates, citizen militias, the lopping off of heads, and finally the crowning of Napoleon as emperor. Along the way, there are gory little details that flesh out the story, including Marat getting stabbed in the bath and more beheadings than you’ll ever need. 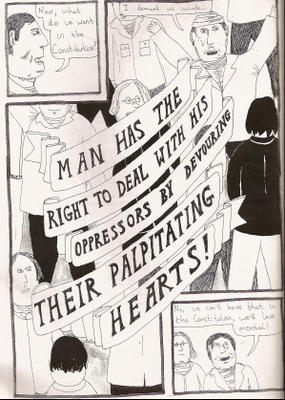 Café Le Guillotine: The French Revolution is $5.25 (or three British pounds) and it’s an oversized mini-comic, really more magazine size than comic. You can email Rob Jackson at rob_in_korea@hotmail.com. I also have his address and you can email me for that and I’d be happy to give you that. Rob says he takes PayPal to make things easier if you want to purchase his comics.
Posted by Shawn at 8:29 AM