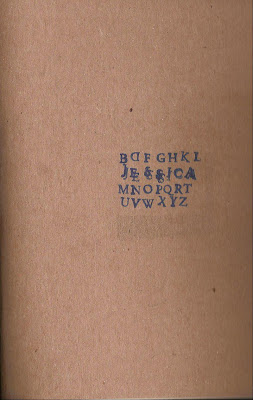 Jessica is one of the most visually arresting minis I’ve seen this year. Jason Overby’s art flits from suggestions of figures, out of focus faces, morphed arms, and seemingly haphazard shapes floating in the background, to panels featuring almost nothing but randomly placed text balloons and squiggly lines. The overall feeling created by Jessica is of an artist playing fast and loose with his pencils and inks, yet you become captivated by the cumulative effect of all those lines and an appearance of sleight of hand. 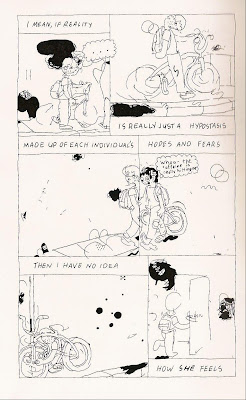 Jason uses a few styles of drawing that switch at random. At first it looks like the styles switch between an old comic or memory to the present, but the two bleed into each other’s territory and you’re left with randomness. This isn’t distracting. In fact, it adds to the overall charm of this book. 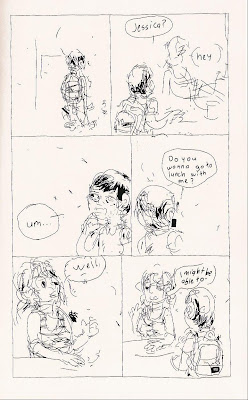 Jessica is about the artist’s experience trying to date Jessica. They go on a date, but ultimately end up as just friends. In the present, he’s still distracted by the one that got away. For the cover, Jason uses a thick, virtually unadorned recycled brown card stock that looks like something used as the backing for a pad of legal paper. No information other than the title scrambled inside four lines of randomly stamped letters and Jason’s name on the back cover.

You can check out nice page scans of Jason’s comics at Discrete Funk. Unfortunately, Jessica is sold out on his blog. You might be able to grab a copy from Rick Bradford’s Poopsheet Shop though if you hurry. For more of Jason, read Austin English’s 20 Questions with Cartoonists Interview.
Posted by Shawn at 3:39 PM