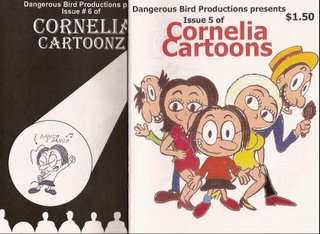 Cornelia Cartoons, or Cartoonz as of issues six and seven, resembles a newspaper strip in it’s visual simplicity. Also several of the stories are longer, which would fit well in an episodic format. The central character, Cornelia, is the butt of several jokes and stumbles into mishap after mishap.

In these three issues, Crum has assembled a string of misadventures and pop culture barbs surrounding Cornelia and her small gang of friends. Cornelia joins a corporate group of protestors and they try to use her as a martyr on stage, she is nagged into buying a “rare” animation cell and later regrets her purchase, she’s fired from “SmallMart” and then almost re-hired when a friend takes on the company for discrimination.

Cornelia Cartoons is decent cultural satire, but American Idol jokes do not age well. Luckily, there’s enough here to balance any outdated jokes. My personal favorite pieces were the ones starring Ed Thud. Below is a page where Ed struggles to get the plastic off of a CD. 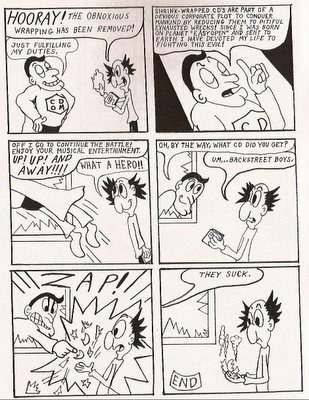 Not pictured is a story where Ed’s head falls off every time something good happens to him. Job promotion? How exciting! Whoops, there goes Ed’s head. Yes, it’s silly, but the fun kind of silly.

The art in Cornelia Cartoons is stripped down with a minimal use of blacks or shading. An exception is this page, which uses some black backgrounds and some shading. 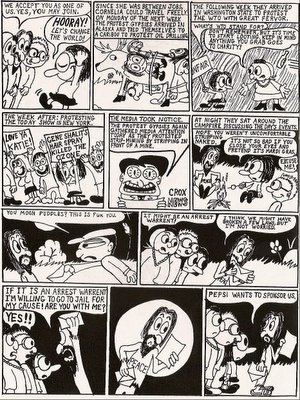 Issue five of Cornelia Cartoons has a color cover, sixteen pages and a price tag of $1.50. Issues six and seven have black and white covers, thirteen pages each and price tags of $1.00 each. For copies, email Crum at kmartin1001@yahoo.com. There’s no website that I can see listed in these issues.
Posted by Shawn at 4:25 PM