A pair of minis from Marcos Perez

There are a lot of mini-comics that have found their way to the SIZE MATTERS offices, and I’m starting to make a dent in them. I need to be caught up before SPX though, so I’ll continue loading new minis every other day. Maybe every day if stuff keeps coming in.

Today is Marcos Perez day. Marcos sent in his Carl is The Awesome Vol. 1 and Mercury Lounge.

Carl is The Awesome Vol. 1 is pretty awesome for what it is, and that’s a collection of four short minis tucked into a little sleeve. It’s not just a mini-comic. It’s four mini comics – in a little sleeve! 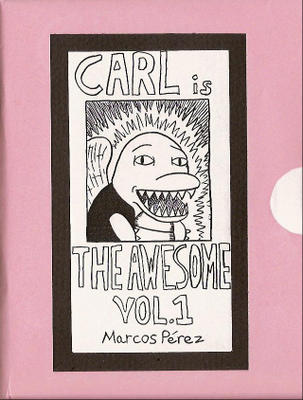 Carl is a dinosaur with a tail like a beaver. He’s about four feet tall, kind of pudgy and he is awesome. Or he thinks he’s awesome and he wants every one to know that he is. That’s the set-up. Issue one is an introduction of sorts to Carl. He says things like, “I have strong haunches and very sturdy teeth!!! My body is rugged like corduroy!” and “Ladies demand my sexuals!!” That’s Carl and that’s all you need to know to get started. In issue two, he introduces you to his band “The Supersicks,” and explains how they make their songs and all the rock star stuff they include on their rider. 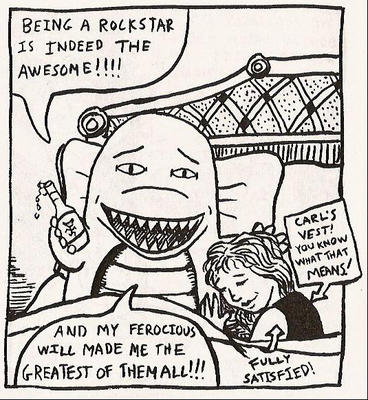 Issue three of Carl is The Awesome Vol. 1 is a informal lesson on how to score with the ladies. Carl explains how to make eye contact, select an opening line, how to navigate a conversation with a lady, how to kiss and when to use “C’mon!!” Issue four is the Carl runs for public office issue. Let’s put it this way, he’s an interesting debater.

Each of the four issues are eight, usually single panel pages, including the covers. The back cover counts as the last panel of the story. Carl is The Awesome Vol. 1 is $2 and you can get your copies at Cliff Face Comics. Perez is kind enough to have the first issue of Carl’s adventures on the website in color. GO check it out; you know you want to.

Also by Perez is the wordless mini-comic, Mercury Lounge. This one has a nice stiff cover made of pink paper with a black paper overlay. On the front cover, there’s a cutout with the title visible from the first page. This is a nice touch and it gives the mini a sturdier, well-crafted feel. 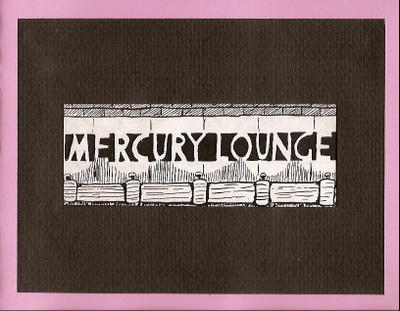 Inside, you’ll find a twenty-page tale of a night out at the club. Three friends, a girl and two guys, meet up in front of the Mercury Lounge and a fourth friend, a girl, joins them as they are exchanging greetings. One of the guys, Perez I’m assuming, sees the new girl and is immediately smitten. The rest of the evening is Perez trying to make some kind of contact with the girl at a loud show and then a loud bar afterwards. It’s a sweet story and he does a pretty good job of telling it without words. I like it when artists use a word balloon with symbols or pictures inside rather than words. Andy Runton’s Owly mini-comics used this to great effect, although I don’t recall any with a mug of beer in them. But anyway, Perez uses them to show the reader what’s happening a few times, most effectively when he shows a tiny guy with a guitar next to a calendar with Dec. 21st highlighted. I also liked when he hands the girl a copy of Carl is The Awesome. She loves it of course. 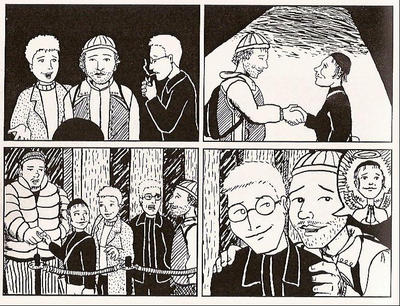 The art in Mercury Lounge is much more detailed than in the Carl collection. It’s obvious that Perez put much more time into the lines of the sidewalks, building facades and interior scenes. He creates an effective setting for his characters, even if they seem a bit stiff or awkwardly posed at times. I enjoyed Mercury Lounge and you can go here for a short preview. Like Carl, Mercury Lounge is $2. It’s also available at the website.
Posted by Shawn at 7:34 AM

I haven't read these yet but I'm looking forward to it. The phrase "Carl is the Awesome" keeps repeating in my head. It makes me laugh.

It's pretty funny stuff. I had a little Carl voice in my head after reading it. I also thought about giving Carl Barney's voice, which made it really bizarre.