Entropy issues 1 and 2 by Aaron Costain 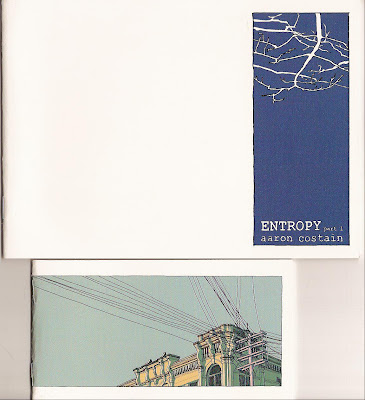 In issue one of Entropy, the protagonist, oddly overdressed for a mild walk along a wooded road, contemplates creation myths and converses with the woodland creatures. Costain lends a level of anxiety to his tale even before the pesky ravens assail his lone traveler. This fellow is anxious about the ravens but also concerned about creation. He tries his hand at deity to no avail (at first). Then, to mess with his peaceful day, the ravens arrive. 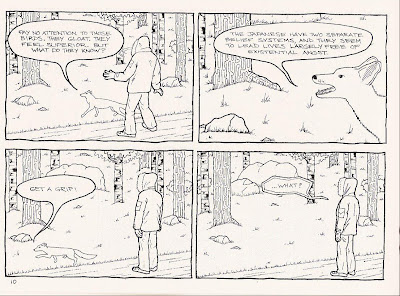 The art in the first issue of Entropy reminded me a bit of the art in Jiro Taniguchi’s excellent The Walking Man (Fanfare/Ponent Mon). The lines of the trees and leaves are ultra detailed, giving the setting a degree of hyper-reality. The level of detail isn’t quite as defined as Taniguchi's, but the comparison is still useful as a point of reference. 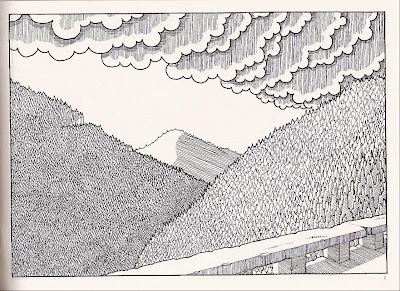 Issue two of Entropy is a bit of a departure from issue one. The cover is gorgeous enough to consider for a print; I’d hang a print of that on my office wall in a second. The departure comes from the subject matter and ultimately the reduced size of this mini.

It’s broken up into two stories; the longer, “the SHAME that made a MAN out of MAC,” and the brief “automatism 1.” In “the SHAME,” Mac keeps getting flat tires (3 of them!) on his bicycle. The first two times, he rolls his bike to The Bike Clinic for a flat tire repair. You get the sense that Mac thinks the gods are mocking him with the repeated flats. By the time flat tire number three arrives, Mac decides to take matters into his own hands, and thus he becomes – a MAN.

The art in issue two is less detailed than issue number one, especially in the second story, “automatism 1.” The art here is much looser, a function of the tiny panels (eight of them) crowded onto each page. This doesn’t ruin the art, but it forces Aaron to use less detail and rely on simple lines. It works pretty well.

I forgot to mention that Aaron get s extra points for including a Murakami reference in response to the foxes comments shown above, “You haven’t read too much Murakami, have you!”

You can get more information on Entropy and look at more of Aaron’s comics at his website.
Posted by Shawn at 8:12 PM

that is a really lovely comic.
great site by the way.