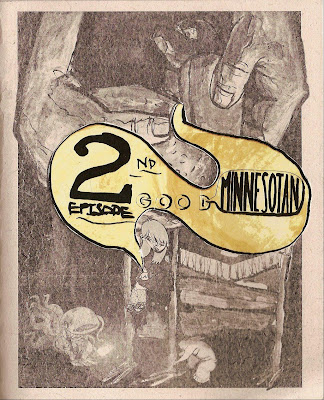 Good Minnesotan is an impressive collection of art and comics compiled and edited by Raighne and Meghan Hogan. This description, from the first issue, is concise and accurate: “Good Minnesotan is a comic/sequential art compendium. The focus of the collections will be experiments in story-telling through the printed form with an obvious keen look at comics all over the board. We give a hard push on the local crowd and those just cutting their teeth on the medium.

The first issue, largely featuring work by Raighne, with supporting roles by Meghan and Justin Skarhus, is dark and menacing. This issue appears heavily influenced by David Mack, Dave McKean, and strangely enough in the first story, Jim Mahfood. Nothing in here is content to simply rest on the page. You encounter abrupt, sometimes confusing, shifts in narrative, as well as artistic jumps in perspective and structure. Raighne uses pencils, inks, watercolors and charcoal to construct a changing palette of textures and depth. 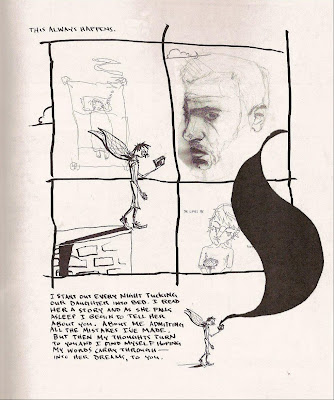 While the first issue of Good Minnesotan is solid, it’s the second issue where I feel like it hits an artistic stride. Raighne and Meghan have now brought more artists into the fold, including Ed Moorman, Gail Kern, Joseph Nixon, Alex Witts, Luke Holden, John Holden, and Nicholas Breutzman.

“Back Pages,” by Ed Moorman and “The Ripoff,” by Nicholas Breutzman and John Holden, are the most traditional “comics” pieces in this 86-page issue. They both feature your standard comics panel structure. Ed Moorman’s “Back Pages” features a reporter hounding a 1966 Bob Dylan as Dylan continually escapes the reporter’s queries. Ed uses a nice balance of black ink and traditional shading to create balanced and visually pleasing panels. For instance, most scenes feature a black-clad Dylan sharing the scene with a lighter, crosshatched suit-wearing reporter.

In Nicholas Breutzman and John Holden’s “The Ripoff” a guy is keen on showing a girl his pierced penis. I won’t give away the story here totally, but the events of the story are accurately represented by the title. Ouch! Anyway, the art here, and I’m only guessing that Nicholas is the artist by the bios provided, is very polished and would seem right at home in an anthology like Fantagraphics’ Mome.

The rest of this issue is more experimental. Meghan Hogan has a couple of pieces that are more prose or poem than comic. “Too Much Time on Land” is a swimmer’s meditation on limits accompanied by moody charcoal and painted images. “Yard Work” is a woman’s internal conversation pasted over bold, sketchy drawings of a brooding character named John. Page 31 is particularly moving and convincing. This is good honest work. Over three side by side panels, Meghan moves from manic, looping pencils that crash and converge on each other, to a middle panel of thick lines and relative clarity. The last panel is a close up of John’s face – one unblinking eye confronting the reader. 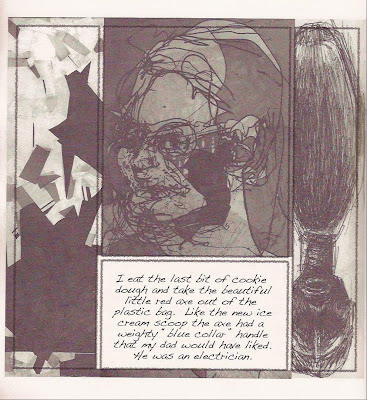 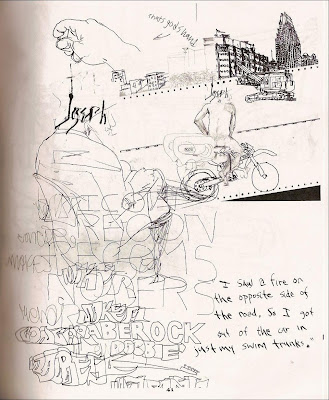 Alex Witt and Raighne Hogan have an extended piece titled “Cloak of the Moon.” A revolutionary coup d'état leader is haunted by visions of a “pale skinned whore“ intent on ending his new rule and life. Raignhe’s art perfectly matches the tone of Alex's tale. 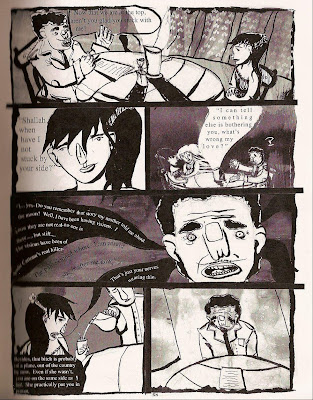 The pages of Luke Holden’s untitled work feature 28 tiny, silent panels on each page. Luke’s work here could be called micro-stories – successive drawings that show barely perceptible gaps of time elapsing from panel to panel. Your eyes flow over uninterrupted scenes that represent short bursts of action. His drawings are deceptively simple, but ultimately charming. Luke's work reminds me a bit of Brian Chippendale's art, but less chaotic and without the snaking reading pattern. 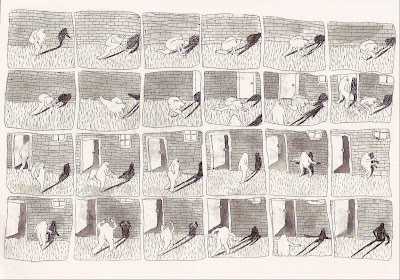 Tune in tomorrow for a review of Good Minnesotan issue 3.

Buy issue 1 for $5 and issue 2 for $12 at the 2D CLOUD's online store. To keep up on the latest regarding TGM, check out the Good Minnesotan blog.
Posted by Shawn at 6:11 PM