Hopefully, you are familiar with Sparkplug Comic Books. They are a quality publisher of mini-comics, comics, and books, as well as a must visit table at finer comic conventions.

Months ago, I received a fat package of comics and books including a few comics that fit in well here at SIZE MATTERS. Dylan and the gang publish these in Portland, but they retain that oh so appealing mini-comic factor. At the same time, the materials and design feel kind of luxe and consistent giving off a "publishing house" vibe. 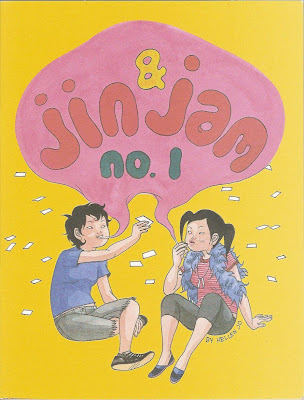 The first issue of Jin & Jam by Hellen Jo is a barely contained riot over 36 black and white pages. Sure, Hellen tells a linear story, but her art has a manga-like (think Matsumoto’s Black & White or Blue Spring rather than something cuter like Sgt. Frog) energy that’s impossible to ignore. Movement is hyper and exaggerated at times and the volume of the text expands, threatening to burst out of the straining word balloons. Hellen is having a ton of fun and so is the reader.

The characters are over the top stock characters – the good girl who might not be so good, the bad girl, the sidekick – but Hellen also tosses in the rough and tumble conjoined twins, Ting & Terng to test the story’s protagonists. Roughly a third of the book is an extended fight scene, but even the fight has some lovely interludes. I’ve posted a few images from Jin & Jam to illustrate some quiet moments. Notice the carp floating in the black backgrounds in this first image. 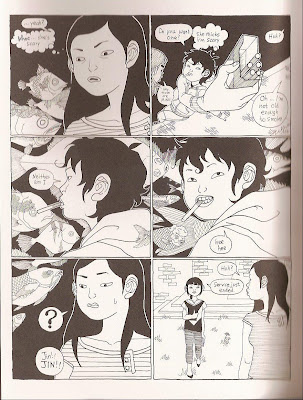 I love this page showing the Jin and Jam floating up into sky littered with SAT flash cards after Jin says, “I wanna get out of here! 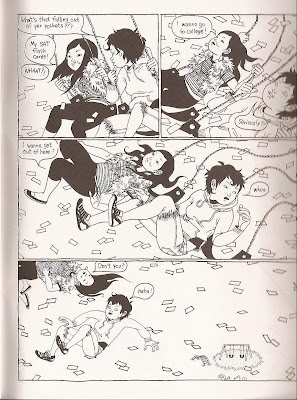 For more information, check out Hellen’s website or Sparkplug Comics. Jin & Jam is $5 plus shipping. 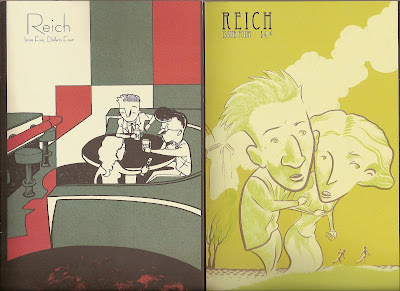 Issues four and five of Reich by Elijah Brubaker continue the story of the young psychoanalyst Wilhelm Reich in 1920’s Vienna. Reich reminds me a bit of Chester Brown’s extensively footnoted Louis Riel. Elijah takes his subject seriously, but also isn’t afraid to bend history for a good yarn. Where he does depart from history, he makes sure to let the reader know how and why he diverges.

Reich is visually austere, which serves the storyline and subject very well. Walls are a stark black and the faces rarely smile. However issue four is a little lighter in appearance. Here you see the emotion and changing points of view that mark a reunion of Reich and a friend. 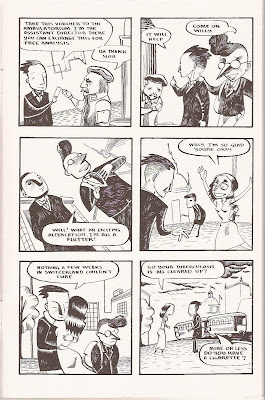 Elijah softens the austerity with the shape of his characters; the heads are large and rounded and the noses are exaggerated. Children are more cartoonish and less well developed. On the page below, the young daughter almost looks like a cartoon character in an otherwise reality-based comic. This is a neat touch. 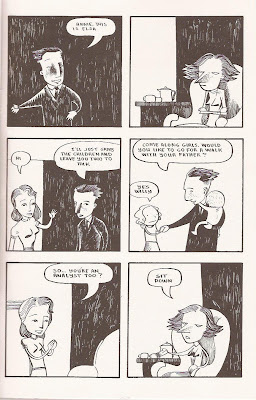 Each 24-page issue of Reich is $4 plus shipping and handling. You can get yours through the Sparkplug Comic Books webstore. For more information on Elijah's work, check out his website.

Side note part one: On a visit to Powell's Books in Portland, Kate picked me up a mini-comic and it was a Sparkplug Comic Books mini called Super Crazy Cat Dance by Aron Nels Steinke. It's adorable and fun!

Side note part two: Sparkplug Comic Books will be at MoCCA this weekend. Here's a posting from their website on new books and events.
Posted by Shawn at 4:52 PM