Up a Blind Alley and Paunch by Scott Smith 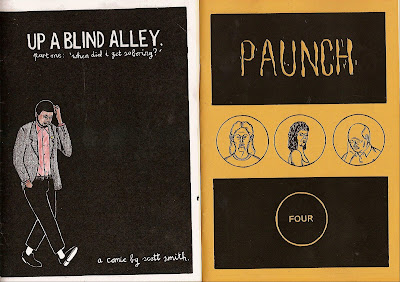 Scott Smith's Up A Blind Alley, subtitled "When did I get to be so boring," entertains with its deadpan humor and laconic pace. Scott's art is rather stiff, but it works well in this mini-comic. For instance, there's a panel to panel transition that has Scott talking to a girl at a boring party. It's one of those situations where he doesn't know anyone and feels awkward. In the first panel as the girl faces him, he starts to say something about teaching. Rather abruptly in the next panel, the girl's head is turned away from him. His thought bubble says, "Fair enough." The stiffness of Scott's art adds to the feeling that one might get at such an event.

The stories in the 36-page Up A Blind Alley meander into each other kind of like life unfolds. Before you know it, Scott slips off to a local pub and runs into this: 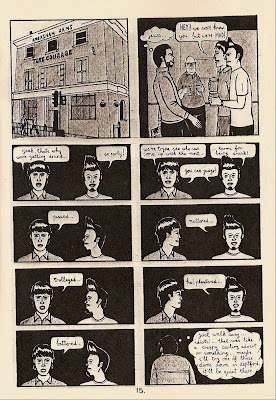 I enjoyed Scott's work here. It's slice of life, autobiographical stuff that most of us can easily relate to. He records awkward moments that revolve around the unpredictability of our fellow travelers.

The pages of Blind Alley are cream colored and Scott uses some nice shading to give his art some depth. This one has a nice, deep black cover with a hand colored figure of the artist walking in a blind alley, scratching his head. It's a good juxtaposition with the content inside.

In Scott's fourth and latest issue of Paunch he steps out from the autobiographical and into more straightforward storytelling. Three of the four stories ("Cat in a Bag," "Forbes Thorpe in... Speed Date," and "Charlie Cymric: Part Four") are character pieces about a creepy old guy, a creepy younger guy, and a guy recently out of prison. In the fourth piece, Scott gets back to Scott's observations on things that bug him - some game show hosts, sunglasses worn inside, bed head, drinking tea just to be cool. 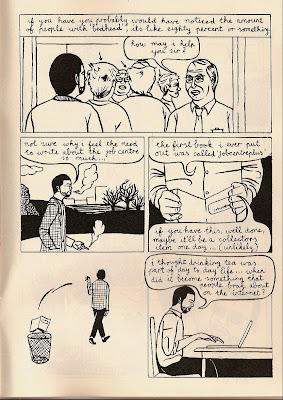 You can check out more of Scott's stuff at his blog. I'm sorry I don't see a price for these, but if you email Scott, I'm sure he can give ou the scoop. One last thing, I liked this little "Thank You" page: 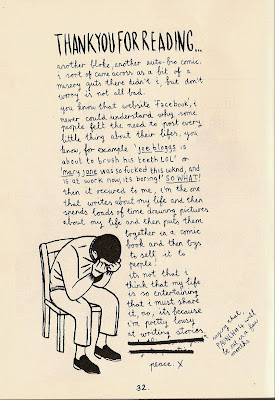 Hi. Long time reader first time caller. I have something I'd love to send you and will very soon. Hope you don't mind. All the best, Get In Here Comics.

please check mine too : FREE Comics and Manga Download