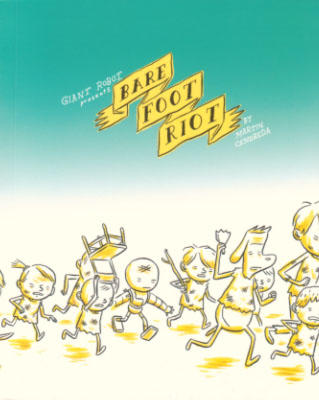 Over at my weekly Comic World News gig, I posted a review this morning of Martin Cendreda's new mini-sketchbook from Giant Robot. I thought readers here might be interested in the sketchbook, since Martin has so recently made the switch from mini-comics. Here's a piece of the review:

Bare Foot Riot is the largest sampling of Cendreda’s work that I’ve seen and it’s also the most eclectic. There’s everything in here from straight gags, very loose sketches of scenery and buildings, and longer comedy strips. He riffs on advertising, super hero costumes, pop culture figures and toys, and each sketch has that familiar and pleasant feel that I’ve come to expect when I look at his work. But there’s something else. When you’re accustomed to a cartoonist’s obvious flair for cartooning, you may forget that they can actually draw real world stuff as well. His gag cartoons have the stripped down utility where every line is essential, in other words, there are no wasted lines. Cendreda’s figures in his comics and gags are all big heads and gangly limbs; his characters look comical regardless of the situation, which is where much of the humor in his work lies. In Riot, however, you’re introduced to another side of the artist. There are serious studies of chairs, life drawings, and accomplished animal sketches that show the same confidence as the line he uses for his gags. It’s interesting to see Cendreda work in so many different styles in one book...

There’s plenty here that pleases me, because it’s done in a familiar vein as the artists other work, but there’s a lot here that challenges what I expected to see when I purchased the book. This is more multi-faceted than anything else I’ve seen from Cendreda and it’s priced very attractively. It’s twelve dollars for 98 pages of sketches, several pages in color, and it’s in a mini-comic size.

the one bad thing about this blog is that it's going to end up making me spend lots of money.

That's a really beautiful cover on that Cendreda book.