Issue number four of Mr. Big is here and Matt writes that he hopes to have issue five out by SPX. Let’s hope so, because the world needs more Mr. Big. 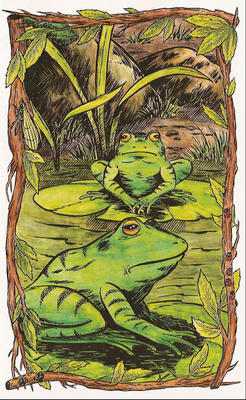 Mr. Big is a snapping turtle that lives in a pond. He terrorizes the other animals of the pond and they’ve secretly began plotting a way to get rid of him. This issue it winds up in the hands of the crows, who circle overhead watching everyone else as they go about their business. In this installment, the frogs are discussing Mr. Big and the crows’ decision – or lack of a decision.

If you’ve never read Mr. Big, go check out Wasp Comics.com, where you can read previous issues online. I still remember my first issue of Mr. Big. All of the pond animals were kind of cruising along peacefully at the beginning of spring; it was a very peaceful, almost Zen mini-comic. A mamma duck was floating across the surface of the pond with a few of her ducklings. But then it was a upshot of the ducks little bottoms floating in the water. “Oh shit,” I thought, “Who’s Mr. Big and is he the one that’s looking up at the ducklings?” Then, next panel there were little duck feathers lingering in the air, as the surface of the pond is all ripples and quiet. Crap, so much for a peaceful spring.

Issue two was a “night issue” that’s probably one of my favorite issues, you can check it out online too, but you should just give Matt a shout at m@waspcomics.com and ask him to send you paper copies of Mr. Big issues 1-4. 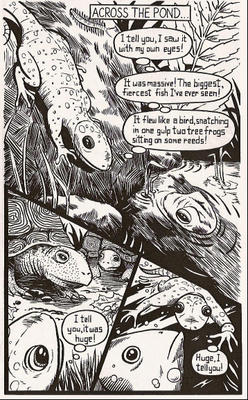 Back to issue four though. Matt and Carol have done something unique in this series by focusing on a pond and the creatures that inhabit it. Mr. Big is both adventure and soap opera, it just needs to come out more often. Issue four ends with no resolution, but being a transplanted Maryland/DC guy, I think I know where they are heading with the new threat that’s just barely introduced in the last few pages of this issue. Issue five by SPX, Matt and Carol. C’mon get to work.

Mr. Big issue four is $1.50 and available by emailing Matt at m@waspcomics.com. The cover is in color, but if I had to have a beef with them, it would be that they need a logo for this series. Nothing fancy, just a Mr. Big across the top or bottom to let readers know what’s up. This is only an issue if you’re going to be sitting on the racks at a comics shop, I guess, but I kind of miss a logo.
Posted by Shawn at 8:46 PM