The Four Husbands by Matt Wiegle 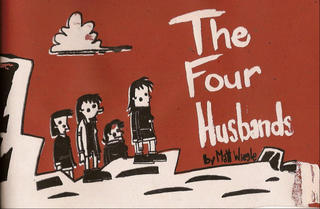 Matt Wiegle’s The Four Husbands answers the burning question of what would it look and sound like if a whale had sex with a human. Well, there’s the usual grunting, the whale’s eyes get kind of bulgy, and it turns out that the girl’s skin becomes irritated from the friction. Whale/human intercourse is probably not something you consider often, but when Wiegle lays it all out there, it’s kind of fascinating. Perhaps I should explain how you get to the whale humping though. Four sisters are sitting by the sea deciding on potential husbands. One says she will marry a whale, one chooses an eagle, another chooses a sea scorpion, and the last one decides to marry a rock.

The Four Husbands is an adaptation of a Native American folktale and a fantastic comic. The four young girls make their choices for a mate at a time when they are fascinated with nature. It never occurs to them to marry the young brave that runs really fast or the kid that’s a really good hunter. “I want to marry an eagle,” says a girl. And really, what could be more majestic or romantic than an eagle? 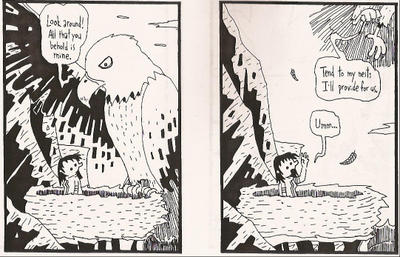 The eagle turns out to be a bit controlling. He drops his new bride in their nest and expects her to stay there while he hunts for food. In a grand display of visual skills and timing, Wiegle shows the girl sitting in the nest, her eyes blinking as the new husband soars into the sky. No words are needed to communicate her thoughts and feelings at that moment. You know she’s thinking, “Well, shit. This isn’t romantic or majestic at all.”

The girl who marries the whale fares much worse. Besides the enormous whale penis, she’s forced to live inside this cave structure with the whale. When she’s hungry she only has handfuls of his blubber to eat. And did I mention that the whale seems to really enjoy sex? The whale is so fearful that his young bride will escape that he doesn’t let her outside. “I have to pee,” she laments. He makes her pee in his hand. She finally manages to get outside, but I'm not telling if she manages to escape from her controlling husband. 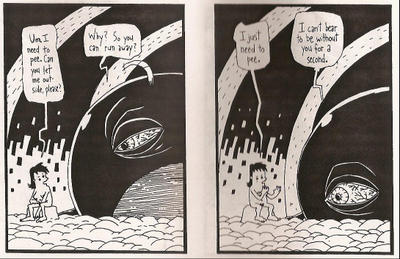 The Four Husbands is a 72 page 8" x 5.5" mini-comic that, according to the blurb on the Partyka website, teaches today's children a very valuable lesson: "Never say you're going to marry a whale unless you really, really mean it." This comic is five dollars, Matt could charge ten and it would still be a bargain. He uses less to give the reader more and this is one of the best mini-comics that I've read this year. It's funny, I said the same thing last year about his Ayaje's Wives.
Posted by Shawn at 10:38 PM

Anonymous said...
This comment has been removed by a blog administrator.
11:16 PM

Anonymous said...
This comment has been removed by a blog administrator.
11:21 PM

Anonymous said...
This comment has been removed by a blog administrator.
11:21 PM

I enjoy reading the stories on your site. Keep up the super articles!

Maybe it's the SIZE MATTERS in the blog title, or maybe it's the mention of "whale's penis" in this post, but now I know what spam comments are.

If anyone needs links to Cialis or Viagra sites, let me know.

No thanks Shawn--I got plenty of those at my old blog. Sounds like an interesting mini--and I love the almost woodblock-ish style art!